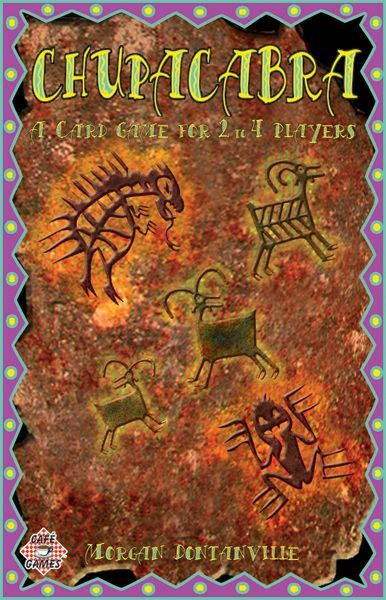 Theme You are the Chupacabra! Your very presence strikes fear into the hearts of Goat Herders everywhere as you live to suck blood; Goat blood! In this game you want to organize packs of Chupacabras to tackle the growing herds of goats. Be aware that while you are strong creatures, you can be outnumbered which makes for a lighter feast as goats will attempt to defend themselves. In Brief Each player has a hand of cards (starting with 5, and variable after that, with a max. of 8). When played, these cards add to the number of a particular pack Chupacabras (3 different types) that you are amassing to attack a particular herd of goats (again, 3 different types), while at the same time add to (or subtract from) the number of goats in a particular herd and. The player(s) that have amassed the most Chupacabras in a particular color gets the opportunity to strike against the herds of goats of the corresponding color. If you outnumber goats you are attacking, you can eat well, but if they outnumber you, then watch out. Object of the Game In Chupacabra, 2 – 4 players struggle to amass packs of Chupacabras to overpower Herds of Goats. Players must push their hand to the limit timing their attacks, and knowing when to call off their packs. Often players will come to the aid of the goat herds to prevent them from becoming easy pickings for other players. The player with the best score after eating 25 Goats, wins. Contents 48 Chupacabra Cards 1 Game Board 3 Goat Markers 4 Chupacabra Markers 1 Rulesheet (single Page)