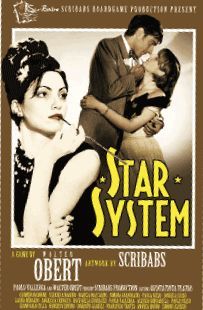 At the beginning of the last century, in the USA some brave enterpriser's foresee the possible economic developments of the invention of the Lumière brothers and founded the first production companies. In a short time their studios became the source of dreams that every American could believe. Initially the actors came from theater, but soon the cinema started to count upon stars more and more famous, liked by the public, able to ensure the success of the movies just with their presence. A deduction game for 2 players. Some actors (and actresses) are dealt to both players, while the rest are kept face down on the table. You try to guess which actors (and actresses) are in the hand of your opponent (i.e. compose her cast). To do so, there are several actions available: each player can choose only one per turn and those not chosen are still implemented in a sort of "neutral" way (helping both players).