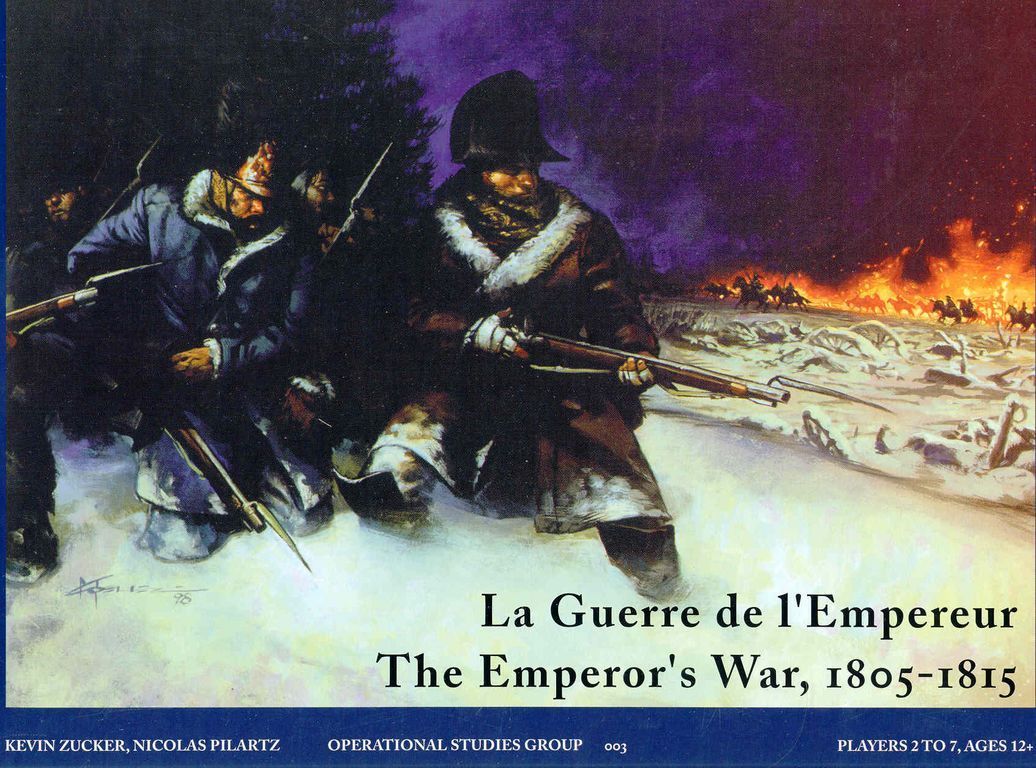 La Guerre de l'Empereur: The Emperor's War, 1805-1815 is a game of maneuver and battle between the forces under Napoleon Bonaparte and six other nations that both opposed and supported him at various times in the years between 1805 and 1815. Players vie for dominance of early 19th Century Europe. As the French player, you'll set Napoleon and his armies upon a continent whose differing political statures plays right into your hands. The greatest army in Europe is at your hands... Divide and conquer! As the British player, you'll utilize diplomacy, clever event play, a powerhouse economy and the greatest navy in the world to become the dominant nation. As Russia, Austria, Prussia, Spain or the Ottoman Empire, you must strike a balance between expansionist aggression and diplomatic harmony among your neighbors. Indeed, a nation must expand to triumph. However the means chosen to that end will largely decide the level of success. Play the part of being everyone's friend and your nation will likely live in relative safety...and lose the game miserably. Play the part of the blind aggressor and you'll likely go down faster than the peace broker. Striking a balance is critical. The game map covers the territories from Scandinavia in the north to the Mediterranean and North Africa in the south, and from deep Russia in the east to Portugal and the Atlantic in the west. Movement is by areas (provinces) on land, and sea zones at sea. On land, the units of maneuver are (roughly) corps, while at sea each unit represents a naval squadron. When opposing land armies meet for battle, corps are broken down into divisions (loosely) and deployed on a eight zone battle map for combat resolution. The dice-less combat engine uses a system of battle options which are played and cross-referenced for resolution of actual casualties and morale loss. The number of battle options distributed, along with the initial army morale of the opposing sides, is determined by army size, nationality and leaders present. The battle options are of offensive and defensive nature. The offensive options cover standard maneuvers such as "Flank Attack", "Cavalry Charge" and "Assault", while the defensive options are things such as "Refuse Flanks", "Squares Formed" and "Reverse Slopes". The rules are relatively simple and fast moving, even though a host of subtleties and complexities of the Napoleonic period are represented within the game system. The means by which this relative simplicity was achieved was (largely) through the use of self-explanatory strategic event charts. Be warned: This game is easy to understand and play, but very difficult to master. The game system works the same whether you're playing with two players or seven. With multiple players, you'll need all of your diplomacy skills to enlist aid in achieving your goals. With fewer players, the event charts will handle the bulk of the diplomatic duties. Regardless of how many players you have, all seven major powers will actively participate to a greater or lesser degree.