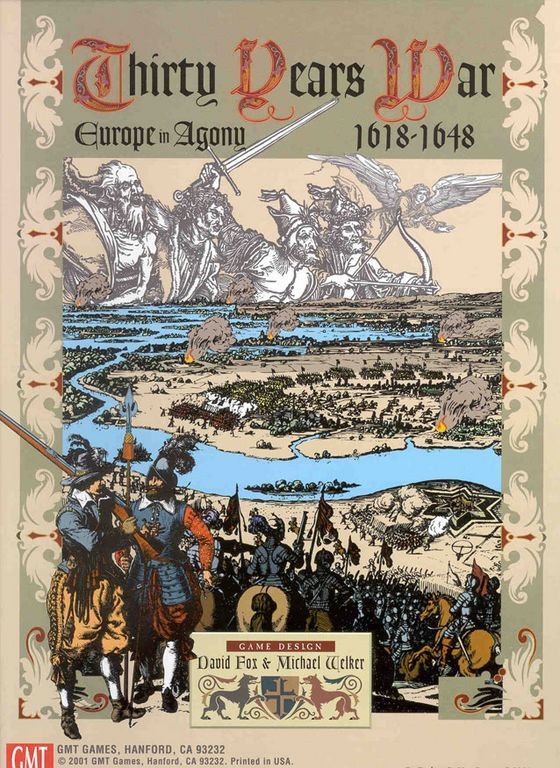 (from GMT website:) Central Europe, 1618. Germany is a jigsaw puzzle of independent Electorates, Bishoprics, Dukedoms, and Imperial Free Cities nominally under the control of the Holy Roman Emperor in Vienna. An alliance of Protestant leaders rebel against the Emperor, who raises armies to suppress them and regain Catholic property lost during the Reformation; the surrounding kings of Spain, France, Sweden, and Denmark intervene to stake their own claims. Germany is plunged into thirty years of war that will last until 1648, when the exhausted combatants sign a peace establishing the competing spheres of interest that will control Germany for the next two centuries. Thirty Years War recreates this conflict with the award winning game system used in GMT's Wilderness War, Paths of Glory, and For the People. There are four scenarios provided: the Full Campaign (14 turns), Early War (5 turns), Intervention (3 turns), and Apocalypse (5 turns). This is a two-player game; one controls the Protestant forces (German Protestants, Sweden, Denmark, Hungary, France) while the other runs Catholics (the Empire, Bavaria, Spain, and occasionally Saxony, which can switch sides during play!). The heart of the game is the playing card decks of 55 cards that each player receives. Playing a card gives a player the option to move and attack with an army, to recruit new units, to bank up money to pay ever-hungry troops, or to declare an event. The Peace of Westphalia made certain that Germany would remain divided for another two centuries. Can the Catholic player defy history by recreating the power of the old Holy Roman Empire? Does Gustavus Adolphus survive to dictate peace to the Emperor in Vienna? Thirty Years War allows the players to determine these and other historical what-ifs, while opening a window onto one of the most influential events in European history. COUNTERS: 456 full-color die-cut counters. MAP: One 22"x34" full-color mapsheet CARDS: 110 Strategy cards OTHER: Two 10-sided dice, 32-page Rulebook, 2 Player Aid cards TIME SCALE: 2 years per turn MAP SCALE: Point-to-point system UNIT SCALE: 3-5,000 men each NUMBER OF PLAYERS: One or two DESIGNER: David Fox DEVELOPER: Michael Welker ART DIRECTOR: Rodger B. MacGowan MAP & CARD ART: Mark Simonitch COUNTER ART: Mark Simonitch and Rodger B. MacGowan (BGG user description:) A direct descendant of Paths of Glory, 30 Years War covers the confusing post-Reformation conflict in central Europe, as the Holy Roman Empire attempts to reassert domination over the protestant states. On the side of Catholicism we have the Holy Roman Empire (Austria and some of Northern Italy at this point) and Spain, opposed by a cast of thousands: the German Protestants, Sweden at the height of her power, France, England, Denmark, and others. While there are some new mechanics, virtually the entire game is borrowed from elsewhere: Leader activations and movement are as in Hannibal, combat is straight out of Paths of Glory (minus the flanking), and Siege resolves much Hannibal. Your armies have to be paid, with Aid Points that are received just like Paths of Glory's RPs. An interesting twist is that the movement and support of armies results in the landscape getting Pillaged, so as the game goes on the board becomes less and less capable of supporting military operations.