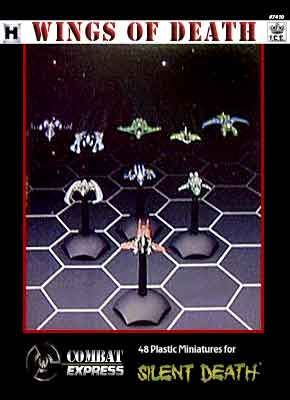 From the back of the box: Wings of Death contains 48 finely crafted silver-plastic space fighters sculpted by the renowned Bob Naismith. Designed for play with ICE's explosive Silent Death spaceship combat game, these ships can also be used with any other space combat game or RPG. You get 4 each of 12 different designs, the same vessels included in the Silent Death: The Next Millennium Deluxe Edition. Each ship comes with its own black, hex-shaped plastic stand. They fly well and look great unfinished, but they are even cooler painted with acrylic or enamel colors. This boxed set contains the same plastic ships which are included in the Silent Death: The Next Millennium boxed set. There are four of each of these ships: Blizzard Dart Hell Bender Kosmos Lance Electra Night Hawk Pit Viper Salamander Spirit Rider Talon Teal Hawk Thunder Bird Expands: Silent Death