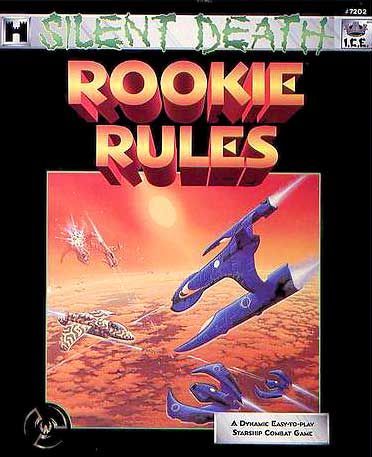 THE dumbed-down version of Silent Death for the next generation! From the back of the box: Hawk eyed his instruments as his squadron sped towards the marauders. "Get your Talon back into formation, Parker." "I saw something in the asteroid field, going to confirm." "Negative, Parker, back in line." " Almost there . . ." Across the void Hawk saw the flare of thrusters ignite as his board lit up. The bogie was a Nighthawk. " Abort Parker! Abort!" The massive guns of the Nighthawk flashed across the asteroid field like a small sun and Parker's ship vanished in silent fury. Some rookies never live to learn. Silent Death is an exciting, quick-playing, and easy-to-learn star fighter combat game. In Silent Death, your star fighters and their proud and cunning pilots will combat enemy forces in the vastness of space. Here is everything you'll need to begin the Silent Death experience! This set includes a subset of the rules and components from Silent Death: The Next Millennium, while still allowing for a wide diversity of weapon types, crew quality, and tactical situations. Rookie Rules includes: • Streamlined rules from Silent Death: The Next Millennium • Starcraft display book • 6 rookie scenarios • Set of 9 polyhedral dice • plastic missiles, torpedoes, and asteroids • 'Itivo 24" x 36" fold out hex maps • 24 plastic ships (2 each of 12 different designs) + bases