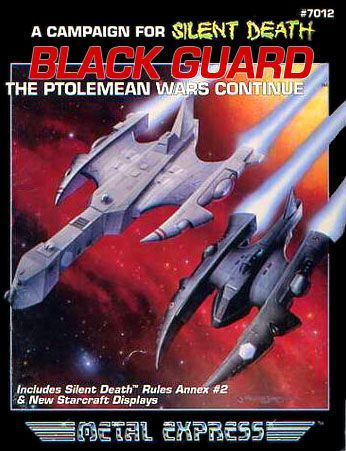 From the back cover: BLACK GUARD:THE PTOLEMEAN WARS CONTINUE " Let Operation Hurricane Begin!" With these words, Marshal Beznikov ushered in the final Colosian assault on the Ptolemean Homeworld. As chronicled in the first Silent Death expansion, Overkill, the dire Ptolemean Wars began with invasions from Houses Colos and Dneprodzerkutsk. Now, after nearly a year of desperate fighting, the Colosian Fleet is ready to take the capital of House Ptolemus in one final, cataclysmic battle. Is the fate of House Ptolemus sealed? Will it pass into the void, cast out of the Imperium as a depleted renegade power? Not if their last few fighter pilots have anything to say about it! Black Guard chronicles the climactic battle which closes out Imperial Year 475 and marks a significant turning point in the Ptolemean Wars. Black Guard, designed for use with the Silent Death ™™ Metal Express ™ game, includes the following: • Starcraft Displays for four new fighters and two new gunboats: including the Dart™, Talon™, Lance Electra™, Sentry™, Star Raven™, and the awesome Betafortress™. * • Revised and reissued Starcraft Displays for every fighter and gunboat which has appeared in Silent Death and Overkill. These new updated displays incorporate Optional Rule material, such as the number of Decoys carried and the quality of each vessel's Point-Defense munition system. • Historical Summaries and Orders of Battle for four new fighter wings: Black Guard and the Brothers Of Enmity fly for House Ptolemus, while Gale Force and Monsoon fight for the invading Colosians. • Four new scenarios pit Ptolemean and Colosian forces against one another deep in the crucial Hathor system. • Rules Annex #2 for Silent Death provides guidelines for playing this game in 3-D, using Point-Defense systems against Missile Salvos, and more. • Color renderings of unit badges and more starcraft paint schemes. Expands: Silent Death