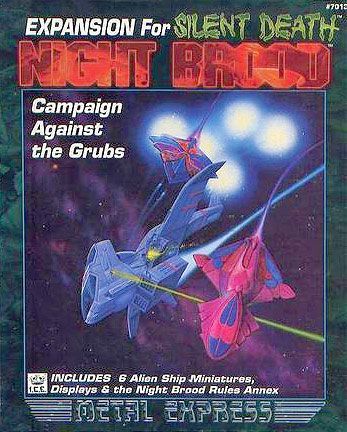 From the back cover: A gruesome new menace stirs on the periphery of known space. Armed with devastating technologies and a thirst for mayhem, these Hatchling aliens (known simply as Grubs), burst forth from their hidden Clutch-worlds. Millions of them, including an overwhelming contingent of bio-mechanical starfighters, embark on a sector-wide rampage. In their path stand a few isolated frontier planets with a rag-tag collection of out-dated fighters and ordnance. Emergency calls go out to Imperial garrisons hundreds of light years away. The Terrans muster their far-flung forces, but every delay brings the fall of another frontier world. The clock is ticking, the Hatchlings are gaining strength, and this crisis is rapidly spinning out of control! Night Brood chronicles the events of the First Hatchling Scourge — the invasion of the Tau Albriton Frontier Sector and the subsequent Imperial relief effort. Night Brood, designed for use with the Silent Death Metal Express game, system, includes the following: • 6 new Hatchling starfighter metal miniatures, with bases. These allow you to play the first four Night Brood scenarios. • Starcraft Displays for several new Hatchling starfighters, including the Larva,'" Remora,'" Squidge,'" Lamprey,-Manta,`' and Muskellunge.'"* • Background information on the Terran Star Empire, the Frontier, and, of course, the enigmatic Hatchling aliens. • Descriptions of eight Terran starfighter wings and eight Hatchling fighter swarms. • Eight complete scenarios, and a design-your-own campaign that pits the Grubs against their Terran opponents. • The Night Brood Rules Annex which describes the technologies and capabilities of this dangerous race. • Color counters for Night Brood and Black Guard.