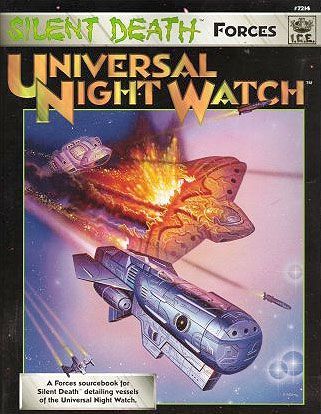 From the back cover: A ball of panic surged in Justin's throat as the wounded Muskellunge appeared within the Ink Cloud off the port side of his Rattler. Though his HUD wouldn't track through that black chemical soup, he opened up with his Splatterguns. No hit. Seconds later his boards lit up as the commander's Falcon achieved an accurate scan pinpointing the exact location of the Muskellunge deep within the cloud. This time his Splatterguns did their work with grizzly efficiency, leaving the Muskellunge a mangled corpse hanging in the dark space. Through sharing resources, technologies, and intelligence, the Twelve created a brotherhood for the defense of mankind. The Universal Night Watch was founded for the sole purpose of insuring humanity's survival against the assault of the Night Brood, horrors from beyond Terran space. There are no forces with better training or equipment, and none more willing to risk their lives for mankind's. UNIVERSAL NIGHT WATCH includes: • New weapons and technology for fighting the Brood • 12 Universal Night Watch Scenarios • 2 New Brood Ships - Muckworm - Vartak • 1 escort class ship - Falcon • 6 new Terran fighters - Hornet - Praying mantis - Equalizer - Rattler - Javelin - Firebat