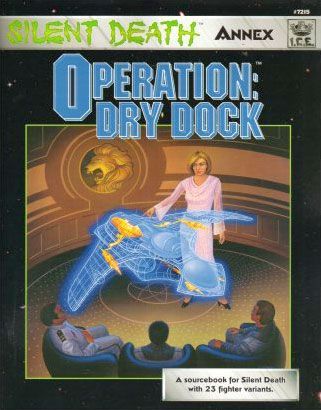 From the front cover: ID flags appeared under the blips on Rand's screen as the Commander's voice broke the silence. "Two Glaives coming in range. Hold your torps! They are out of protobolts and there is no way they can tag us with their Plazguns from this..." He was cut off as an lon Ram from the lead Glaive slammed into his ship. The second Glaive quickly followed suit and the Commander's ship disappeared in an lon storm. Since the Fall of the Empire over a decade ago, many standard Imperial ship designs have become commonplace. Almost every fleet has a few Salamanders. However, within the past five years most of these ships have undergone refits more suited to the fighting styles of the houses using them. Operation: Dry Dock reveals 23 previously unseen ship variants, and provides updated sheets for the original 26 fighters. Operation: Dry Dock includes: • 23 new Terran fighter variants • 26 updated Terran fighters • 6 updated Escort displays • Tonnage on every ship display • Escort rules clarifications • Optional rules