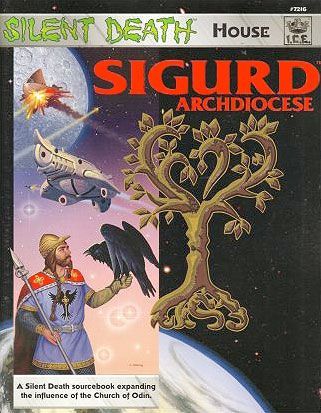 From the back cover: Guttman's battle orders boomed from the com units of the Sigurd Carrier Wing T-01 "Thor's Hammer." There was no sound of doubt or fear, only fury that the Brood would enter Midgard space. "Bach's Symphony, break to intercept the forward elements. Odin's Anvil proceed with me to primary targets. Make them pay with blood, no Brood survivors." The Brood have swept through human domains like a vengeful plague and the Promethians hold sway over many of the Twelve. The faithful of the,Church of Odin believe that only they can stand against these brutal foes and their evil encroachment on human space. Though some call the Midgardians fanatics, willing to throw their lives away for the visions of a madman, they know what is to come. Sigurd Archdiocese shows the Church of Odin's rise to power in the Next Millennium and the rebirth of the church through the strength and charisma of Gunther Guttman. Sigurd Archdiocese includes: • 5 new Sigurd fighter displays - Hound - Hammer - Iceberg - Dagger - Storm • 1 Sigurd escort - Longboat • 4 Sigurd refit fighters - Pit Viper II - Glaive III - Spirit Rider III - Storm II • 6 Scenarios staging 10 battles • New Sigurd weaponry for fighters and escorts • Church of Odin history and timeline • Descriptions of Archdiocese fighter wings