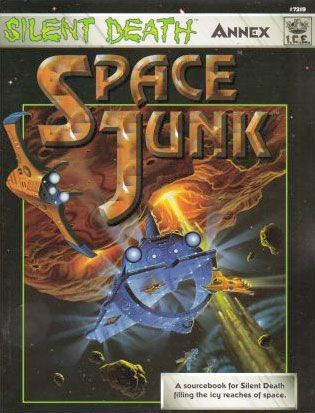 From the back cover: ONE PERSON'S JUNK... The wormhole blossomed to starboard as Keom's ship passed Dagon's moon. He swung his Salamander around, heading straight for it. " What are you doing?" yelled Falkirk from the gunner's seat. " 1 know what I'm doing. Just keep those Vipers off our butt." " But that thing's unstable! Are you absolutely nuts? It'll smash us to bits-or snap shut and trap us in limbo!" " Listen, Falkirk," Keom said as the Salamander's nose crossed the wormhole's outer edge. "Would you rather take your chances with a wormhole..." He jerked his thumb back at the small moon. " ...or with them?" he finished, as a whole fleet of Death Winds and their supporting Warhounds rose up from behind the moon, weapons blazing. Space is still silent, but it's no longer empty! Space Junk gives you every-thing you need to fill your Silent Death games with junk from black holes to mine fields, outposts to nebulae, and wormholes to satellites. Space Junk includes rules for: • Satellites • Outposts • Mines and minesweepers • New rules for asteroids • Black holes and their cousins • Wormholes • Nebulas • Comets • Nova/supernova effects • Starfighter combat in atmosphere • The Solar Worm • Plus scenarios featuring each of these battle-altering phenomena