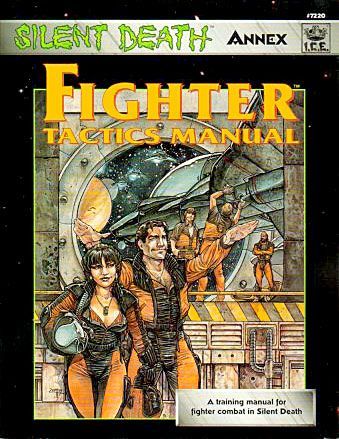 Cover text: "THERE I WAS..." " ...screaming down on the wounded Black Widow," he said, raising his voice over the noise of the crowd. "Splattergun fire streaked past me, but I shrugged it off and closed letting loose with my Minigun. The slugs ripped wide the holes my missiles had already made in their sorry hide. As they ejected, I opened the com for one last taunt at the Widow's poor, misguided crew..." " Tell us-tell us what you said to them!" begged the crowd. He smiled, savoring their undivided attention. " I said: `Like my flight instructor always warned me, you Luches dogs...No matter the ship-never ever leave your wing man.'" The Fighter Tactics Manual is a training guide for the new Silent Death player and also an enlightening refresher for battle hardened veterans. Kill zone diagrams for variable speed and maneuverable torpedoes New prices and optional rules for variable speed and maneuverable I torpedoes Six new Space fighters: Bat Black Widow Nemesis Shark Chupacabra Stinger The Fighter Tactics Manual includes: 3 new righter Wings 3 new scenarios An easy=to-use torpedo dodging chart Guidelines on formation flying Tips on assigning crew and picking forces Expands: Silent Death