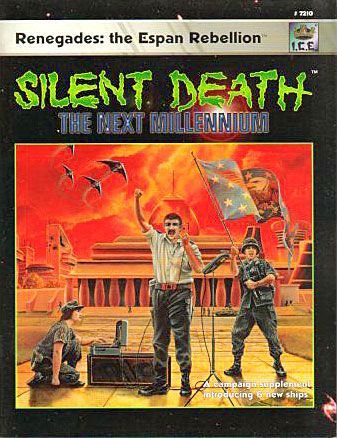 Fron the back cover: Laser blasts flashed past the Mistress's prow as Donner spun the ship through a series of evasive maneuvers while dashing away from Las Hermosas. If he could just make it to the edge of the planet's gravity well, he could kick in the Crescent's hyper-drive and leave those [span cops chasing space dust. The Mistress had already lost its escort, and Donner was not going to let those pilots' sacrifice be in vain. Over the headset he heard his gunner scream, and his heart fell into his stomach... Renegades chronicles the Espan Civil War from the first days after its failed coup to the climactic battle high above the Espan capital of Esperanza. Don't waste another moment-the Renegades need you! Renegades includes: • Nineteen quick-play scenarios • A full campaign system that allows for repeat play • Six new starcraft designs: Bloodhawk (SMAC) Crescent (TMAC) Conestoga (Gunboat) Eagle (Gunboat)' Saucer Shuttle (SMAC) Scorpion (Gunboat) • Two new weapon types: Salvage Claws and Tractor Beams