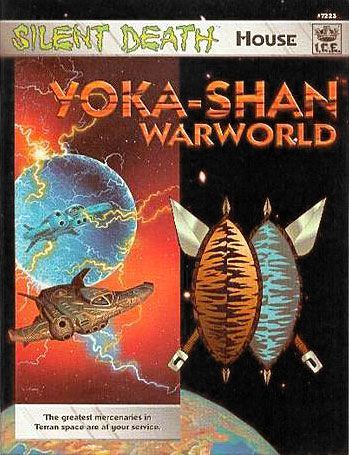 From the back cover: ALL IN A DAY'S WORK Joy and bloodlust coursed through Drascal's body as the Jii seemed to explode an instant before his torpedoes hit. That joy turned to fear as his torps impacted with a fiery sphere of plasma, doing, no damage to the ship within. He opened fire with his Ion Ram and missed. "They have some kind of plaz-screening," he thought, as panic welled up within him. "I can't target through that ..." His thought, ship, and body were shattered as giant shell of plasma erupted out from the enshrouded Jii... Yoka-Shan Warworld presents the history and growth of the most powerful warrior house in Terran space. Yoka-Shan Warworld includes: • 5 Yoka-Shan fighter wings • 9 scenarios with maps • A mercenary campaign with six contracts • A Yoka-Shan time line and history • Yoka-Shan system listing • New Yoka-Shan technology systems: -Plasma Shell Cannons - Plasma Missiles - Plasma Defense System • Four new Space Fighters: -Jii -Iwisa -Iklwa -Kraal • One new Warhound: -Cetshwayo • One refit: -Death Wind YS