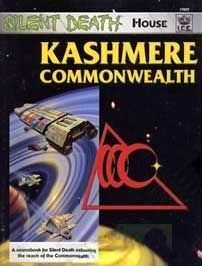 From the back cover: Fighter pilot Yasmine "Jazz" K'yonar waited in the darkness of the tiny, converted cargo bay-the orange glow from her Marut's displays the only comforting light. Impatiently she thrummed the console near the launch button, waiting for the deployment light that would signal her entrance into the battle outside. She heard nothing, but through the docking clamps securing her Marut she felt the rumble of the plazgun charging in the next bay-a surprise for the pirates attacking what they thought was a defenseless freighter. Soon, she thought, soon it will be my turn to teach them the error of their ways-the fatal error. The deployment light flashed green and Jazz grinned fiercely as she slapped the launch button. The bay doors flew open and the Marut sprang from the bay, out into the silent storm of the battle raging around the Kashmere convoy. Kashmere Commonwealth reveals the history of the greatest trading house in the galaxy. It includes special rules for construction of freighters and other cargo vessels, seven new Kashmere house ships and two favorite Silent Death ships refitted as trading or pirate vessels a slew of scenarios and a full campaign of trading caravans and pirate attacks. Kashmere Commonwealth includes: • 5 new Kashmere fighter displays - Marut - Lakshmi - Karttikeya - Varuna - Vishnu/Yama • I Kashmere Bulk Freighter - Ushas • 2 refit fighters - Hellbender K - Teal Hawk K • 30 scenarios including 2 mini-campaign and one extended campaign • Rules for a Kashmere freighter campaign • New Kashmere weapon mounts for fighters • Kashmere Commonwealth history • Descriptions of Commonwealth and pirate fighter wings • Expanded freighter construction rules • Rules for concealing weapons or mounting them in cargo bays