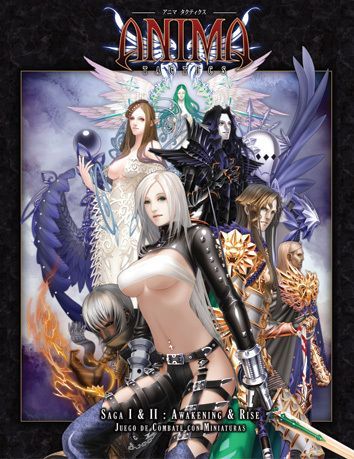 Based on the Anima: Beyond Fantasy roleplaying game setting, Anima: Tactics is a skirmish-level miniatures combat game that pits heroic characters against each other in the struggle between Light and Dark. The system uses 10-sided dice as well as character statcards and asset cards that provide new abilities for the characters. Each player brings a party of heroes to the field of battle, choosing characters, equipment, and other advantages with total levels no more than the fixed value selected for the game (250 levels for a standard game). No party may contain characters from both the Light and Darkness faction, unless all characters in the party are drawn from the same affiliation (there are eight affiliations in the game, such as the Church, the Empire, or the Black Sun trading cartel). In the standard 250 LV game, each player will have 4 ~ 6 models. The winner is the player with the most levels of characters still on the battlefield at the end of ten turns. There are two starter sets available right now - Light faction and Dark faction: Each starter set includes 2 unpainted pewter figures (around 100 LV) 2 advantage cards 1 rulebook 1 ten-sided die Several action counters and state counters.