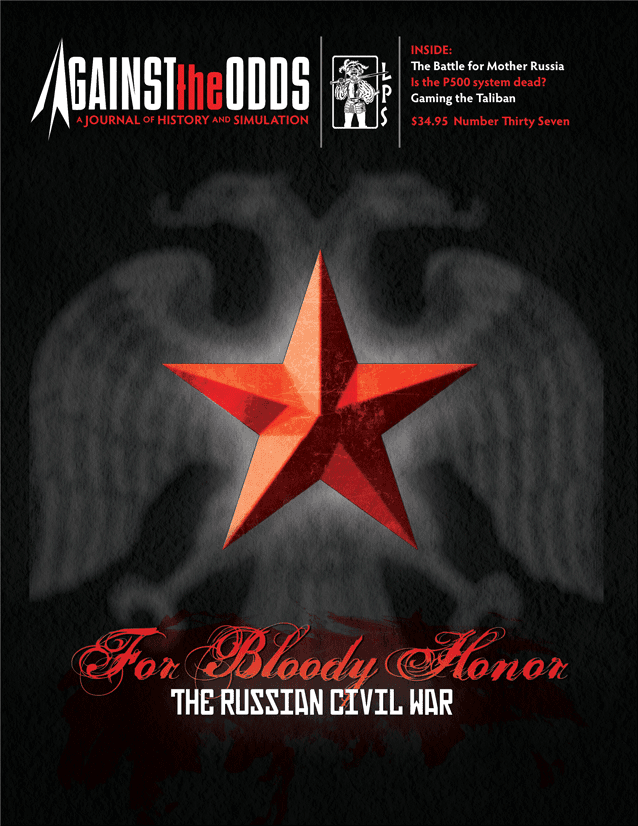 ATO (2012) edition description Though the roots went back decades before, maybe you could say it “started” with a special train, guarded from Switzerland to a Swedish ferry… as part of the German war effort…to “plant” an exiled Vladimir Lenin back into Russian soil, fertile for revolution. The Germans hoped to take Russia out of the war, but they never dreamed how much the world would change. Now, Against the Odds lets you explore the tangled facets of the Russian Civil War, with the historical situation exemplified by a game that handles two to four players…with up to three of them commanding the “White” Russian factions! (In multi-player games, if the Reds are defeated, the game isn’t over yet!) For Bloody Honor: Civil War Russkaya captures the interactions of political influence, railways, foreign intervention, and the discord among the White factions that gave the Bolsheviks their best chance to win in a battle against — as it seemed to them — their internal enemies and the whole Western Alliance. (Yes, there were British, French, Canadian, Australian, Indian, Japanese, and even U.S. troops fighting in Russia as late as 1920…and even later for the Japanese). For Bloody Honor includes 10 game turns, each representing 4 months of real time from the end of 1918 to the end of 1921, and driven by chit pull which will guarantee no two turns are alike. Units represent organized troops of various sizes, with each counter (except tanks) of relatively equal strength. Yes, depending on the situations, this can become a “buckets of dice” game…or the fate of a region (and the political points that go with it) may hinge on a single unit. Defeat can be costly, not only in lost units but in the potential for defecting as your units may decide the other side has more to offer them! Can you, as the Reds, repeat history and form a Union of Soviet Socialists Republics? Or can you, as the Whites, change the course of events in the 20th century?” The only way to find out is by playing to “Pobeda” (victory). Bonus Game Inside! Also included in this issue is a second, bonus game, Operation Cerberus by designer Paul Rohrbaugh. This small Pocket Battle Game depicts the famous event of Feb. 1942 where heavy surface units of the German Navy dashed up the English Channel to reach home waters - right under the noses of the Royal Navy and Air Force! Map - One full color 22"x34" mapsheet Counters - 240 full color 1/2" die-cut pieces Rules length - 12 pages Charts and tables - 2 pages Complexity - Medium Solitaire suitability - Average Design - Mark Woloshen Development - Lembit Tohver Graphics - Mark Mahaffey Against the Odds Magazine #37. Firefight (2006) edition description Mark Woloshen's epic game covering the Russian Civil War has been teaching history students the nuances of this complicated period. Now, Firefight Games offers it as a wargame. The game is unique for the rules cover everything in simplicity yet, making the correct decision makes it tough to master! Political influence and recruiting plays a vital and realistic role, for these decisions will impact military units and their use! Technology (tanks, aircraft) is important but it alone cannot win the game. The beautiful area map conveys at a glance the massive expanses of the war, for each area plays a critical political role. The game is deceptively simple to learn, yet, like Chess, hard to master. A grand strategic game on the Russian Civil War from 1918 to 1922, with each turn being four months, units represent 5 - 15,000 men, while tanks, aircraft, armor cars and armor trains are abstracted amounts. One player plays the Red , the other plays the White Factions (Polish, Kolchak, Denikin etc). The map is divided into zones. The game, designed by Mark Woloshen, designed a game that is used frequently by his students to learn about the complexities of the RCW. Thus, it is focused on how the political influence and control impacted the military events. One cannot win by military means alone. The game relies on activations and recruiting new men to man the armies is of major importance subject the game's political realities! Unlike other strategic RCW games, this plays in a few hours' time.