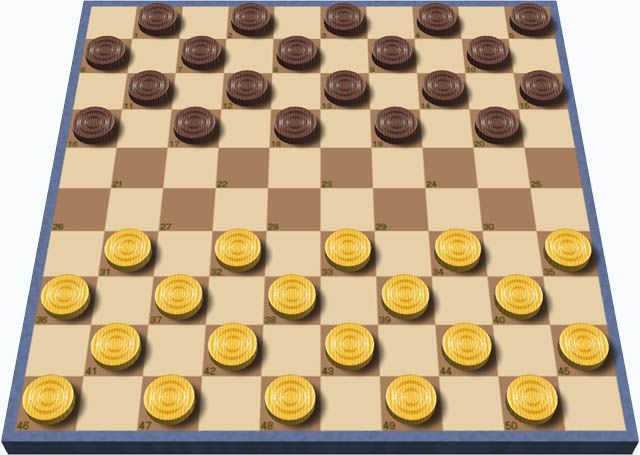 A member of the Checkers Family common in The Netherlands, France and Russia. International Checkers is played just like American Checkers or British draughts, with the exception that it is played on a 10x10-square checker board with twenty pieces per player. This game is played mostly in European countries like France, The Netherlands, Russia, Poland and Belgium and in African nations like Congo, Senegal and Ivory Coast. However, there are countries outside these two continents that boast of good players like in the United States, Italy, Israel and Brazil. Rules of the Game: This game is played on a 10 x 10, or 100 squares checker board where the double corner is on the right of each player. The Moves of the Men: Checkers pieces can move forward on each empty square to the left or to the right. When these pieces reach the last line on the opponent's side they become kings. The Moves of the King: Kinged pieces can move across multiple squares on the two diagonals that cross their position for so long as these squares are open, in a rule known as the "flying kings." Captures: In International checkers, maximum captures are obligatory, which means that if a player has more than one path to jump to capture his opponent's pieces, he must take that path that will effect the most capture of his opponent's pieces. If a piece lands on the king row during a jump, it must continue jumping backward for as long as there is a jump opportunity. That particular piece cannot be kinged unless it finishes the move and stops on king row. Captures by the Men: Men can effect capture by moving forward or backward and jumping over a single piece of the opponent provided that the said piece is adjacent to it and the following square is empty. If the man can jump again from the arrival square to effect another capture, then it must do so. Captures by a King: A kinged piece can capture an opponent's piece if it is on the same diagonal where it is positioned provided that the squares between them are empty and that the square beyond the piece to be captured is also empty. The king can stop on any square within the same diagonal line and if another capture can be effected from any of these squares, then it must continue to do so. The Winning Player: The player who cannot move any of his pieces loses the game. Conditions for a Draw: By mutual agreement of the players. Both players have played five moves, after a position arises of one king against two pieces, which includes a king. Both players have played sixteen moves, after a position arises of one king against three pieces, which includes a king. Both players have moved twenty five moves solely with kings and not a single piece was captured. For the third time the same position arises with the same player at move. Information from checkershistory.com Online Play Boardspace.net (real time play against humans, or play against the computer) SkillGamesBoard (cross-platform, real-time, human opponents or bots, turn-based for registered users)