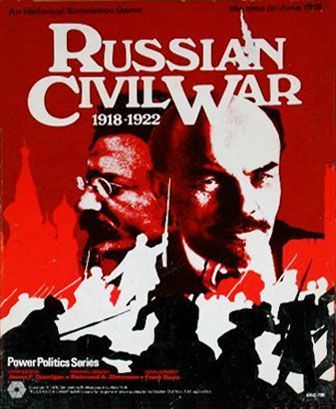 Part of SPI's Power Politics series, the historical simulation of the military and political conflict of 1918-1921 which abolished the Czarist regime and created the foundation of the Soviet Union. Each player controls one or more factions drawn from the revolutionary, counter-revolutionary, nationalist and interventionist forces which historically participated. For this reason, players may even find it advantageous to attack their own forces. Victory depends first on the side one wants (either revolutionary or counter-revolutionary) winning the war and second on being the player most successful defeating the forces of the losing side. Special rules cover the Politburo Central Committee, Purges, the Czar and the Imperial Gold. Optional rules permit any number of players, as well as solitaire. A large number of named leader counters are included. Also there are historical notes, design notes and a 2-page summary of the rules. Re-implemented by: Russian Civil War 1918-1922 (second edition)