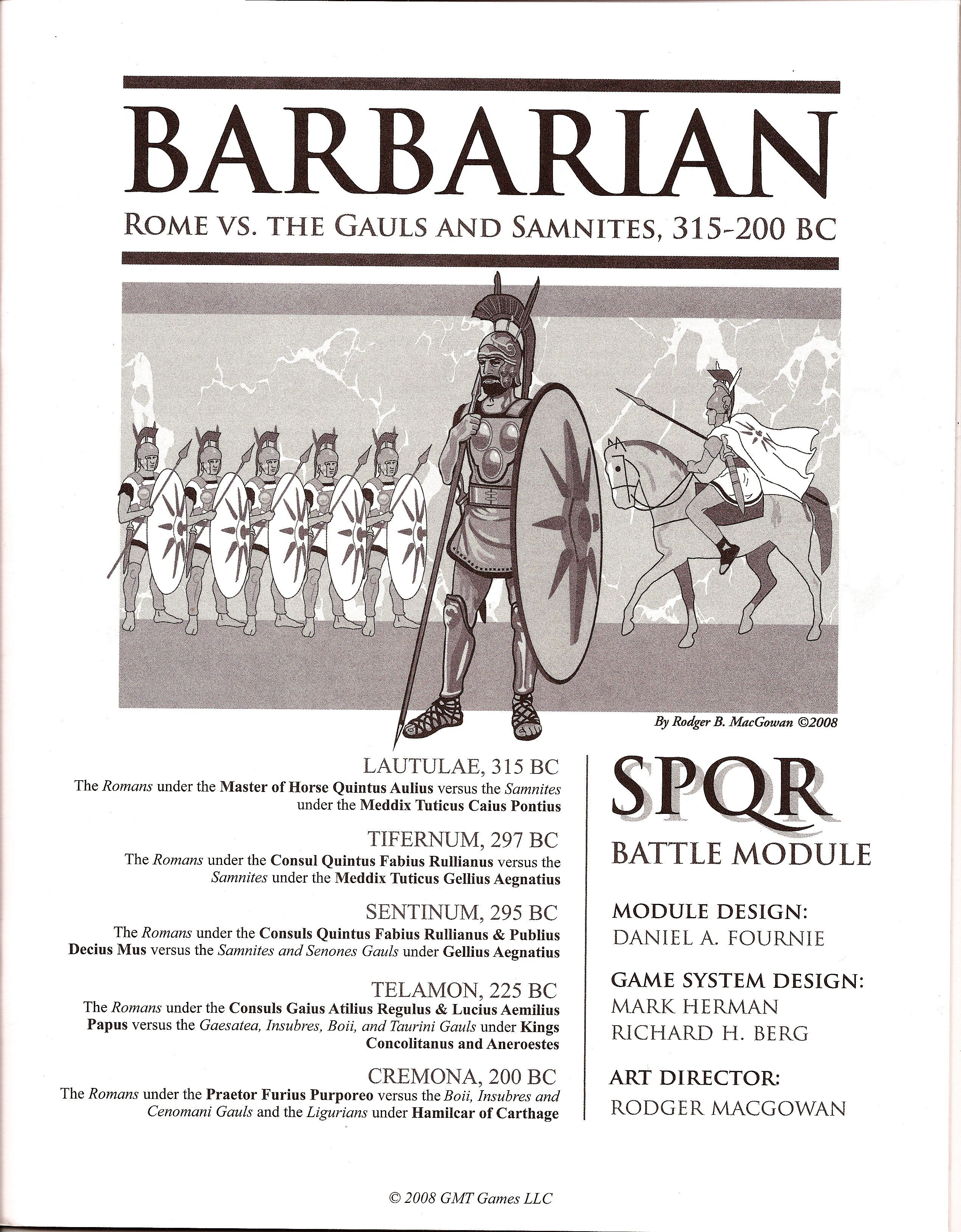 (from GMT website:) Barbarian is a tactical simulation of combat between the armies of Rome and her early barbarian foes, the Samnites and Gauls, from 315-200 B.C. To play Barbarian, you will need the game SPQR for maps, basic rules, and some counters. Barbarian can also be played with the Simple Great Battles of History Rules. As Rome strove to conquer the Italian peninsula in the Fourth and Third Centuries BCE, her most formidable opponents were not the advanced Etruscans, nor the crafty Greeks. Instead, it was the barbarian tribes that nearly overcame Rome: the savage warriors of Cisalpine Gaul and the fierce hill tribe fighters of Samnium. The nimble mountain warriors of Samnium taught the Romans the advantages of a more flexible formation over the ponderous phalanx. After suffering a sharp reverse at Lautulae, 315, the Romans recovered and dealt a counterstroke at Tifernum, 297 in two battles representative of the many fierce fights between these implacable foes. The political genius of the Samnite general Gellius Aegnatius welded former foes Samnium, Etruria, Umbria and the Gauls into a grand coalition that nearly broke the power of Republican Rome at Sentinum, 295. This battle, more than any other, decided the fate of Italy. Even as the Samnites and their peninsular allies were subdued, the Gauls arose to carry on the struggle. Calling on reinforcements from across the Alps, the Gauls invaded Italy in 225 and only by a stroke of fortune was this army trapped between two Roman consular armies at Telamon. The battle that followed was one of the most unusual in all of military history, with the Gauls fighting in desperation in two opposite directions, as Roman armies closed in from north and south. Finally, just after Rome had withstood Hannibal’s devastating invasion, Hamilcar, a die-hard Carthaginian officer, raised the Gallic tribes for one last great battle at Cremona, 200. In the end, Rome emerged victorious and dominated the Italian peninsula from the straits of Messina to the Alps. The Battles: LAUTULAE, 315. The Romans under the Master of Horse Quintus Aulius versus The Samnites under the Meddix Tuticus Caius Pontius TIFERNUM, 297. The Romans under the Consul Quintus Fabius Rullianus versus The Samnites under the Meddix Tuticus Gellius Aegnatius SENTINUM, 295. The Romans under the Consuls Quintus Fabius Rullianus & Publius Decius Mus versus The Samnites and Senones Gauls under Gellius Aegnatius TELAMON, 225. The Romans under the Consuls Gaius Atilius Regulus and Lucius Aemilius Papus versus The Gaesatea, Insubres, Boii and Taurini Gauls under Kings Concolitanus and Aneroestes CREMONA, 200. The Romans under the Praetor Furius Purporeo versus The Boii, Insubres and Cenomani Gauls and the Ligurians under Hamilcar of Carthage Components: 140-counters a double-sided map Rule/Scenario Book (includes Simple GBoH scenario setups) Module Design: Dan Fournie GBoH System Design: Richard H. Berg and Mark Herman