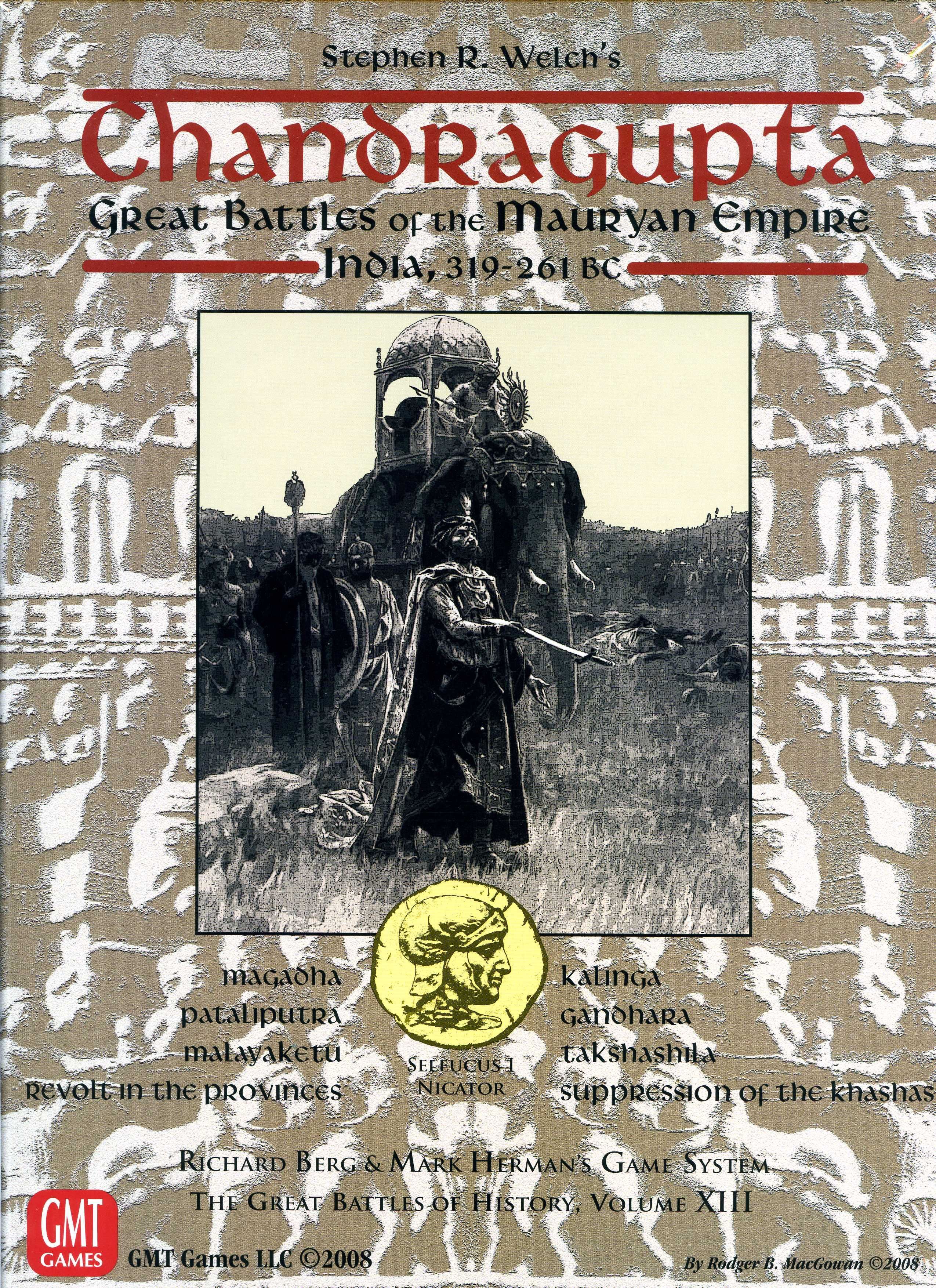 Chandragupta brings the art of war in ancient India to GMT’s “Great Battles of History” Series. Beginning with Chandragupta Maurya’s victories over the Nanda clan, the game follows the brief but rapid rise of the Mauryan dynasty, from Chandragupta’s expulsion of Seleucus from the Indus river valley to the conquest of the last independent kingdom on the subcontinent, Kalinga, by his grandson Ashoka. The Mauryan empire became the largest and most powerful in India’s history – a distinction that would remain unchallenged until the arrival of the Mughals some 1,700 years later. Chandragupta simulates the traditional “four-fold” division of the Indian military system, with the elephant corps reigning supreme, and the hordes of light infantry regarded as little more than fodder for chariots’ wheels and trampling pachyderms. Chariots still play a prominent role on the Indian battlefield of the era, but the cavalry, with its versatility and endurance, is a potent competitor. In Chandragupta, victory goes to the commander who can master the unique aspects of the differing Indian military “classes” – the professional, lifelong soldiers called Maulas, the mercenary levies, unpredictable tribal allies, and the militias of the powerful trade guilds. While Maulas and mercenaries are commanded under a single hierarchical command structure, the tribals and the trade guilds are led by independent chiefs. Units include cataphracted elephants, “heavy” four- (and sometimes eight-!) wheeled chariots, and even an “elCH” unit – yes, elephant-pulled chariots. Rules include Combined Chariot/Infantry and Elephant/Infantry lines, Dharmayudda or “just” warfare, Guild enmity, and Tribal loyalty. EL units can even breach camp walls and pull down city gates (if they don’t rampage first). Fans of GBoH will appreciate the exciting variety in Chandragupta’s scenarios, from huge set-piece battles on flat plains, to tribal suppressions, a night assault on a military camp, and street fighting in the city of Takshashila. Chandragupta is the 13th volume in the series. Battles: Pataliputra (319 BC) – Chandragupta’s mentor, the Brahmin Chanakya, brashly challenges the Nanda dynasty with a cadre of mercenaries. Maghada (317 BC) – Chandragupta again confronts the Nandas, who are this time led by the formidable general Bhadrasala. Mayalaketu (317 BC) – Chanakya attacks the turncoat general Mayalaketu and his rebel army in camp. Takshashila (316 BC) – the Thracian general Eudamus, allied to Indian king Ambhi, defends the city of Takshashila against Chandragupta’s assault. Gandhara (304 BC) – former officer of Alexander the Great, now “Master of Babylonia,” Seleucus I Nicator crosses the Indus river to invade Gandhara, and is confronted by the Mauryan army at the river’s banks. Revolt in the Provinces (275 BC) – Chandragupta’s grandson, Ashoka, brings a relief force to lift a rebel siege of Takshashila and rescue the aging Chanakya who is holed up in the city’s palace. Khashas (274 BC) – Chandragupta’s son, Bhindusara, puts down a confederation of the independent Khasha kings with an attack on their mountain strongholds. Kalinga (261 BC) – the most famous battle of the Mauryan era, Ashoka’s army attacks the kingdom of Kalinga in a huge – and bloody -- set-piece battle.