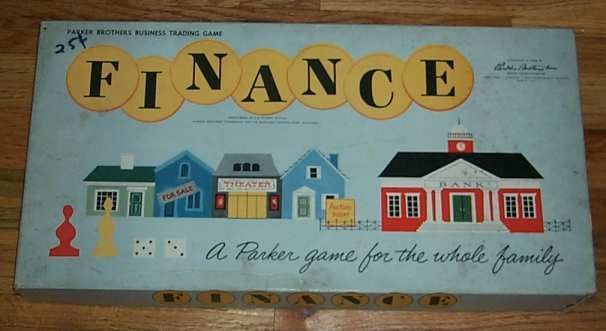 In 1932, Finance was first published through L. S. Ayres & Co, and then by Electronic Laboratories. The name was changed to Finance after legal council advised game developer Dan Layman that the name "Monopoly" was (at that time) in the public domain. Lizzie Magie first copyrighted the game in 1903, in slightly different form, under the name The Landlord's Game, and this game was made by hand in small quantities and was distributed mostly by individuals. At this time, the name "Monopoly" was first used to describe the game. Though slight differences appeared in regional play of the game, the game was remarkably similar to the Darrow version of Monopoly. Parker Brothers wanted to promote the Charles Darrow version of the game, even though they knew that it was not Mr. Darrow's creation. However, Dan Layman had already published Finance, and the game had been around for years. According to a Time Magazine article dated February 17th, 1936: "I wrote the entire rulebook for the game of Finance in 1931 (copyrighted 1932) and simplified the old game of Monopoly for manufacturing purposes..." --Dan Layman "Almost exactly this same game as played at Williams was put on the market in Indianapolis early in 1932 through L. S. Ayres & Co. The name was changed to Finance for trademark reasons... " This was the only article published which contradicted what would become Parker Brothers' assertion that it had published the original Monopoly, and that Layman's version was a spin-off. Layman had forced the retraction by Time in 1936, of an article two weeks earlier titled "Monopoly and Politics." What was unknown to Time was that Layman had sold Finance to a small games manufacturer, David W. Knapp, the originator of the popular 1930s games "Krazy-Ikes" and the "Knapp Electric Questioner". Knapp's Finance game was stiff competition to Darrow's Monopoly, and outsold it at a 10 to 1 ratio. In fact, Knapp Electric had just begun national distribution. To eliminate this legal and commercial threat to their newly acquired Monopoly game, Parker Brothers purchased the rights to Finance from Knapp for $10,000--a significant sum at the time. But it was a far cry from the millions in royalties that were paid to Charles Darrow. Parker Brothers changed Finance so it was less similar to Monopoly and in 1935 created a front organization called the Finance Game Company in order to market the game. Parker Brothers made additional changes in 1936 and published it with the Parker Brothers name, after which the Finance Game Company was never heard from again.