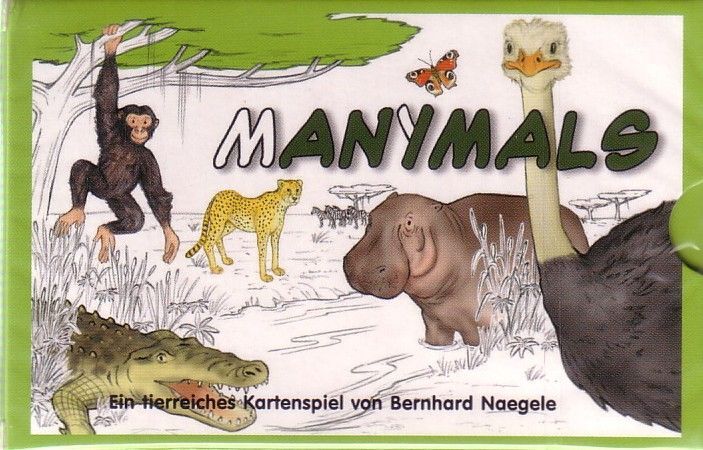 Sarah and Dinah are standing totally amazed in the zoo in front of the sea lions. Something is laying next to a rock with feathers on its back? "Does a sea lion have feathers like a bird or does it have fur like a dog?" Suddenly somebody claps their hands and the duck that was hiding behind the sea lions flies off quacking. Relieved, both of them laugh at each other after seeing that the sea lion doesn't have any feathers after all. In Manimals, players compete to find as many animals as possible with a certain characteristic. To start play, shuffle the animal cards, then spread forty of them on the table so that everyone can see them. Flip over one card, see the characteristic identified on this card, then race to pick up all animals that feature this characteristic. Once everyone has finished picking up cards, check all the cards collected to see whether anyone made a mistake; if so, that player must return the mistaken card and one correctly collected card. Players repeat this process six more times, first laying out three more cards from the deck each time, then they see who has collected the most cards and won! Manimals includes rule variants that allow for play with children as young as four.