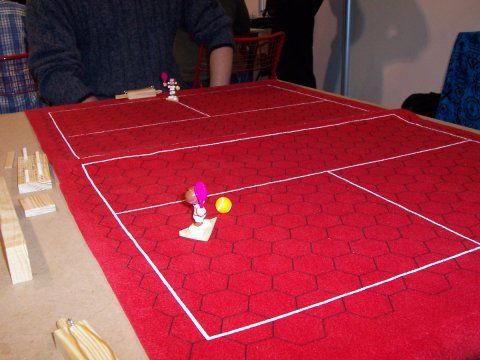 Affentennis (Monkey Tennis) is a dexterity game with a good strategic design. The tennis court is overlaid with a hex grid, and players use a rubber-band mechanism to hit the ball. The Monkeys are used only to note the location of the player on the court -- they could have just been cubes, but look much better this way. The Monkeys, by the way, are from south German television commercials. The game includes options you might not expect from the name or from an unknown small publisher. Each player has a limited amount of movement when hitting or returning a shot, and then can "borrow" from their next move but this puts them under pressure and thus limits their ability to shoot most effectively. Other clever options include the ability to serve and volley using a clever wooden block idea, the ability to lob over a volley using a ramp, and the ability to smash a volley.