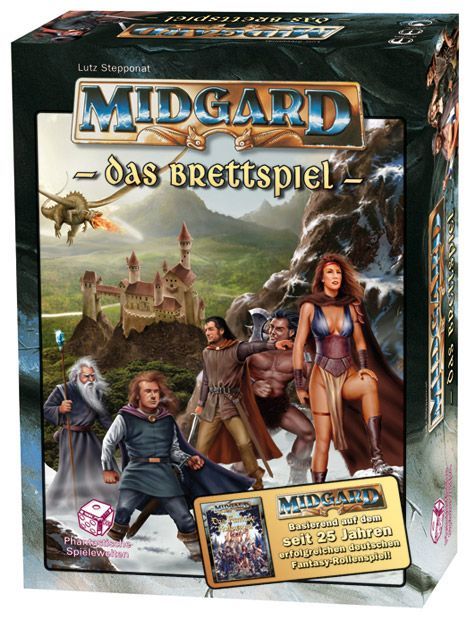 The game tries to recreate the Midgard role playing feeling in a boardgame. It addresses former Midgard RPG players, who don't find the time for role playing anymore, as well as fans of fantasy boardgames. As the complexity level is rather high and the game offers multiple options for players, Midgard is rather successful in achieving it's goal. The difficulty is still light to medium, despite dozens of cards that influence the game and the characters. The game is based on tiles (major cities of Midgard) players move across, collecting rare items and fulfilling adventures. Often this ends in the local city jail or in clashes with monsters. Additional threats like terror cards or riots pop up in cities during the game. Tests are made with a 20-sided die and the mechanics are just the same as in the Midgard RPG. Movement and actions are controlled by action cards from a four-card-hand which allows tactical gaming. Each action card has different abilities and some may even interrupt another player's turn. Players may form groups for the duration of a game turn to help each other solve adventures or make difficult tests. Sticking together earns each player of a group experience points and treasure cards. As only one player can finally win the game, forming groups is a two-edged sword as it helps your opponents too. The goal of the game is to get 3 treasure rewards, rise to character level 3 and find 2 artifacts first. If you deliver the treasures and artifacts to the correct city you have won the game. Included are pre-generated characters like Sorcerer or Warrior but players will be able to create their own characters in the final release version. This information is derived from the website of Phantastische-Spielewelten. http://www.phantastische-spielewelten.de