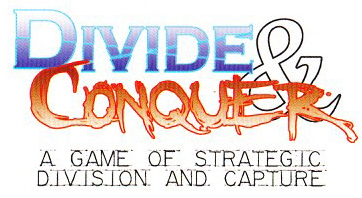 Divide and Conquer is a game of dots and lines played in two phases. One player is black, the other white. Players take turn drawing white or black dots, according to their color. They then take turns drawing lines between dots, without regard to color. Points are scored when a triangle is formed which cannot be further subdivided. The player who completed the triangle scores one point for each of their own dots in the completed triangle. The game ends when no further triangles can be formed and the player with the most points is the winner. Divide and Conquer was invented on a dry-erase board with colored magnetic dots in 1996 and was published in the Origins preregistration book with the title Triangulous. It is included in Chief Herman's Holiday Fun Pack.