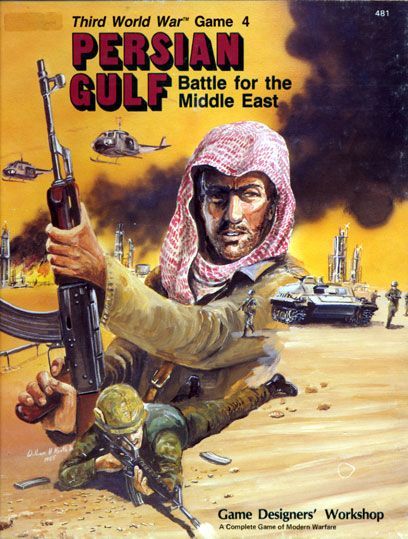 Persian Gulf: Battle for the Middle East: Persian Gulf uses the same rules as the other games in the Third World War series to show a different aspect of modern warfare operations in the deserts and mountains of the middle east. Persian Gulf includes a special "game within a game", covering the diplomatic, political, and military maneuvers by the Soviet Union and the United States in the Middle East before - and leading to - the general outbreak of the Third World War. Both sides try to gain control of the various Iranian factions and influence the other Middle Eastern nations. As the superpowers' confrontation continues, fighting breaks out between committed factions. Either side can decide to send troops to support their factions; the U.S. may send the Rapid Deployment Force while the Soviet Union may use its forces along its southern borders and in Afghanistan. Each move, however, escalates the conflict until the superpowers are directly fighting one another in the Middle East and their alliances in Europe are mobilizing for war. The four game maps cover the Persian Gulf region in detail. Centered on Iran and Iraq, the maps include bordering areas of Turkey, Saudi Arabia, the USSR, and Afghanistan. Mountains and sand dominate this area of the world, and wilderness rules show the effects of the scarcity of roads on military operations. Vying for control of the nations on these maps are the regional forces and those of the superpowers. These forces range greatly in capabilities: from the poorly-equipped and trained Iranian Revolutionary Guards and Soviet-controlled Afghan Army to the capable Turks to the elite Israeli and Jordanian intervention contingents. The Soviets have large forces available in their southern border regions and in Afghanistan. The small but strong U.S. RDF is on hand, and they can call on B-52 strikes for support. The rules cover the special political and military situations of the Middle East and the various Arab and Arab-Israeli rivalries are shown. Victory conditions take account of the oil resources of the Gulf. Additional rules allow Persian Gulf to be combined and played with the other three games in the Third World War series. Game Components: 360 die-cut counters four 17" x 22" one rules booklet one briefing/background sheet one set of game charts one combined-game rules folder two dice Third World War series Microbadges The Third World War fan - Mushroom Cloud