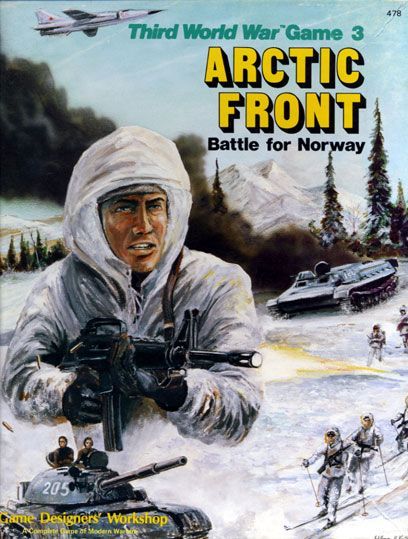 Arctic Front: Battle for Norway: Arctic Front, the third game of the Third World War series, uses the same rules as its predecessors but presents a very different gaming situation. The Soviet Leningrad Front, with its special airborne, amphibious, and arctic-equipped contingents, assaults Norway, reinforced with a few elite units from the U.S., Britain, Canada, and other NATO nations. Norway presents a constricted front to offensive operations. Along the Soviet border, the relatively open terrain in conjunction with possible outflanking moves through Finnish Lappland allows a rapid Soviet advance. The rest of the Norwegian Arctic is mountainous and can be a formidable barrier if well defended. The Soviet player must make full use of his airmobile, airlanding, and marine forces to penetrate this region, while guarding against raids from U.S. marines and British commandos. The complex relations between the Soviet Union and the neutral Scandinavian nations - Finland and Sweden - has its effects in the game. Soviet forces may attempt to pass through the Finnish Arctic, and Finland may allow violation of its neutrality or offer limited or full resistance. Sweden will always defend its territory, but its effort may not be total. Also, Sweden may volunteer an expeditionary force to join NATO in Norway even if Sweden neutrality is not violated. Finally, the Soviet high command may mandate a general offensive in Scandinavia rather than just operations against Norway, providing additional forces from the strategic reserve for combat in Finland and Sweden. Additional rules allow Arctic Front to be combined and played with The Third World War and Southern Front, thus covering all the European war zones of the Third World War. Players can reinforce one front with forces from the others, requiring a host of new decisions on the strategic level. One or two new divisions or air units sent to Norway can turn the tide there for either side, but at what cost to the central or southern front, where every unit is desperately needed? Game Components: 240 die-cut counters two 17" x 22" maps one rules booklet one briefing/background sheet one set of game charts two dice Third World War series Microbadges The Third World War fan - Mushroom Cloud