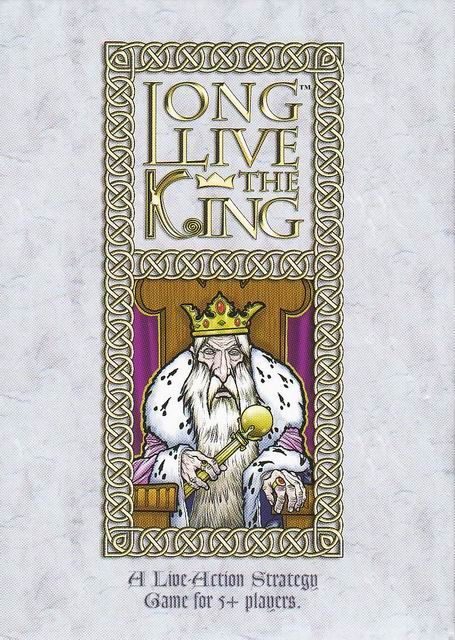 Long Live the King is a game set in the court of a medieval kingdom. The game covers the court conflicts and intriques in anticipation of the old King's demise. In a fragile monarchy, each member of the court will scheme to achieve as much influence on the coming succession as possible. And if victory seems impossible, it might be time to plan your revenge. There are seven unique characters in the game, each with its own special abilities and victory conditions. The King can be played by a Game Master but this is not mandatory, though reccomended. More players can act the roles of minor character, roleplaying the effects of the various cards being played. The seven unique characters are: Ambassador Archbishop Baron Queen Royal Bastard Steward Treasurer Long Live the King is a live-action strategy game that blends diplomacy and backstabbing with strategic control of cards and limited ressources. During the game, each player will receive money and intrique cards and use these to increase their favor with the king, make alliances with other player or further their own goals. But as each player has a unique victory condition, alliances never lasts long in the court of the king. There are three distinct phases in the game, in the Audience phase ressources are distributed, in the Diplomacy phase off-table diplomacy occurs and finally the Council Phase is where players will make and discuss petitions. There is also a heavy emphasis on roleplaying, and each card and ability is recommended to be acted out by the players, as the King can grant Favor to those who perform particularly dramatic or cunning. Game Components: 31-page Rulebook Seven Player Portfolios Royal Bag of Coin Coins of the Realm 200 cards divided into six different types