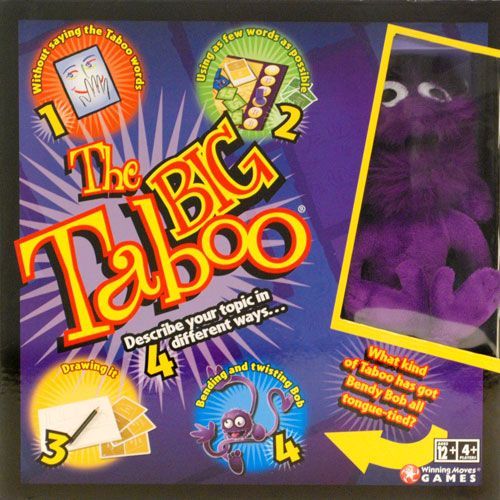 "Get ready to play The Big Taboo... The Big Taboo is one mix between from the traditional Taboo, Taboo Body Talk and Taboo Quick Draw. The play mixes oral tests, mime and drawing. The general principle remains very near to the basic play of the Taboo game. Just like the Taboo you know and love, but with 4 unspeakable ways to play! Race against the timer to get as many guess words as possible. Will you have to draw them, use as few words as possible to describe them, play Classic Taboo or twist Bendy Bob to help your team guess them? You even have a chance at a brain-bending memory round!" Following in the footsteps of Cranium, The Big Taboo is attempting a new lease at life through adding extra mechanics and expanding the basic concept of the original game with variants.