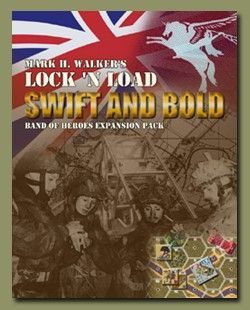 Swift and Bold expands the forces, battles, and options available in Band of Heroes with the addition of the British paratroopers. The expansion includes twelve new scenarios spanning the D-Day drops and Operation Market Garden. There are 85 new counters, 12 missions, and rules covering Piats, gliders, the British 2" mortar, and much more. The new counters are a blast. The British Piat, Vickers MG, 2 Pounder ATG, Horsa glider, Cromwell, Firefly, and Bren all make an appearance. On the other hand the Germans add the deadly, yet unreliable Panther G, 20mm Flak guns, the Panzer MKIV, and new squads. Expands Band of Heroes This game is no longer available, the new, improved and expanded edition can be found in Lock 'n Load Tactical: Heroes of Normandy