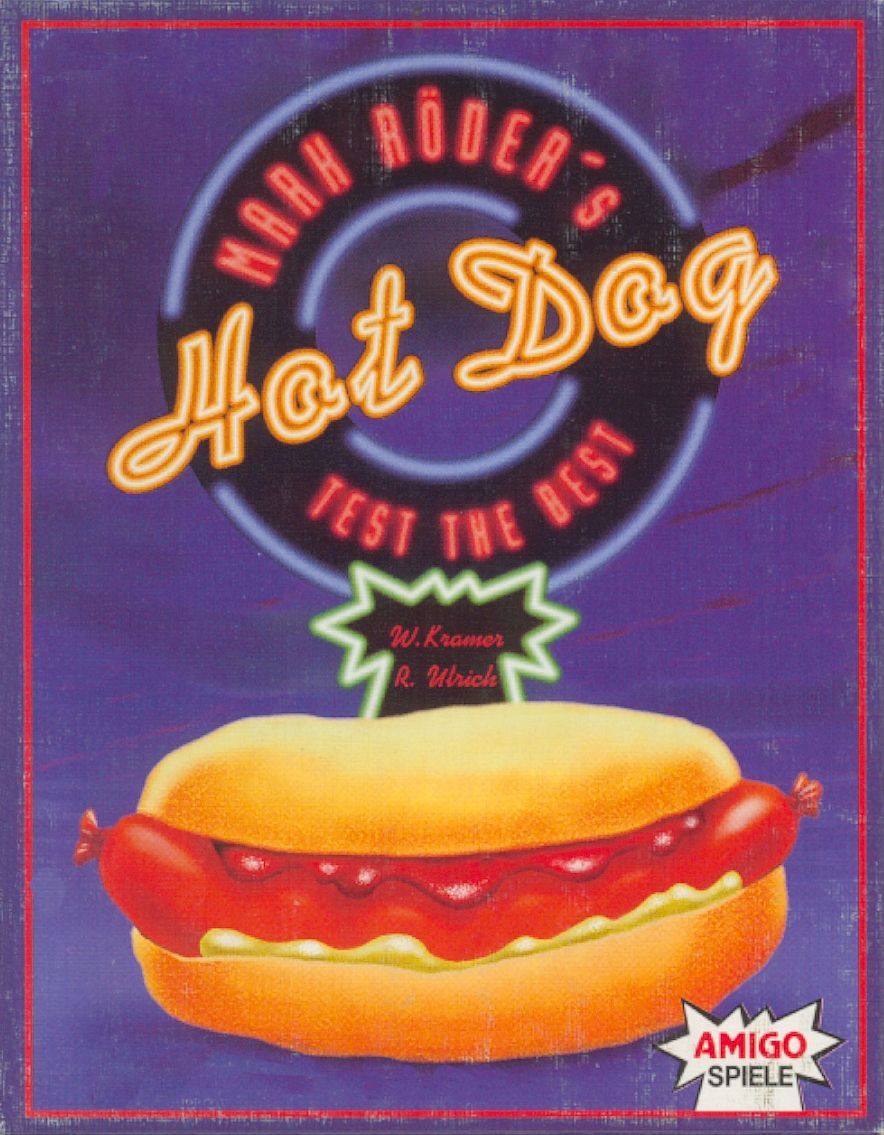 Theme Players attempt to earn the most money by selling their hot dog cards as quickly as possible and for the best price at carefully selected tables. Goal Having the most dollars after three games. Game play Each player gets 10 hot dog cards in one color, 2 or 3 (depending on player number) table cards in the same color, and 3 one dollar cards. The neutral table cards are placed at the center of the table: with 2 or 3 players, there are 2 neutral table cards (with values 5 and 7), with 4 or 5 players, there are 3 neutral table cards (values 5, 7, 9). The table value determines how many hot dogs can be sold at that table. The remaining dollar cards are sorted according to value (1, 5, 10 $) and also placed on the table. The start player gets the ketchup/mustard card. All players simultaneously decide at which table and how many hot dogs they want to sell. Each player puts the corresponding table and hot dog cards on the table, face down. They can also put down dollar cards to reduce the price of their hot dogs. When all players have made their decision, the cards are revealed and tallied up, beginning with the lowest table. When several players want to sell at the same table, the player who wants to sell the lowest number of hot dogs at this table puts them next to the table first, followed by the player who wants to sell the second lowest number at that table etc. Once the number of hot dogs from the players' cards has reached the maximum specified on the table, no other players can sell hot dogs there and any unsold hot dog cards are returned to that player's hand. Dollar cards are used to indicate that a player sells his/her hot dogs cheaper, and this changes the order in which players are allowed to sell (e.g. a player with 5 hot dogs minus $ 2 is allowed to sell before a player with 4 hot dogs because his/her total of 3 is lower than the other player's 4). If hot dog prices are equal, the player with the ketchup/mustard card goes first. As soon as a table is full, each player receives one dollar for each hot dog he/she has at this table. At the end of the round, each player takes back the table card he/she played and the ketchup/mustard card is passed on to the next player. A new sales round starts. When someone plays out his/her last hot dog card(s), he has to announce this by saying "last hot dog", otherwise he may not sell them. When one player has sold all of his/her hot dogs, the game ends. If tables have become full that round, there is a last payout. Then all players count their dollars and write down their points. After three games, the richest player wins.