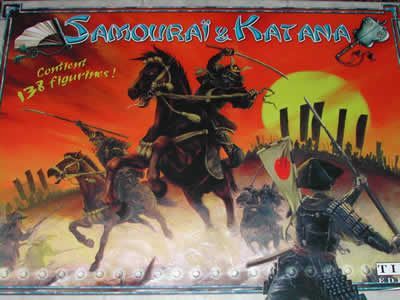 In the XVIth century, during a Japanese civil war, you are a Daïmyo (samourai clan chief) and are attempting to end the civil war by becoming Shogun. Only an honourable Daïmyo can hope to obtain that title. You will organise spectacles, marriages, build castles, trade with China, obtain the loyalty of minor clans, raze sectarian monasteries, call on demons, ronins and even the infamous ninjas during battle. You will try to dishonour and weaken your adversaries, but beware of shifting alliances, treason and assassination... Game Box: 1 map of the game that represents the Japan of the XVI century 55 cards 120 pieces "samurai" (20 each player) 18 pieces "castle" (3 each player) 19 pieces "city" (minor and major) 24 koku (1, 2 and 5 koku coin) 6 cards "clan" 1 Shogun shape with its base 1 Emperor shape with its base