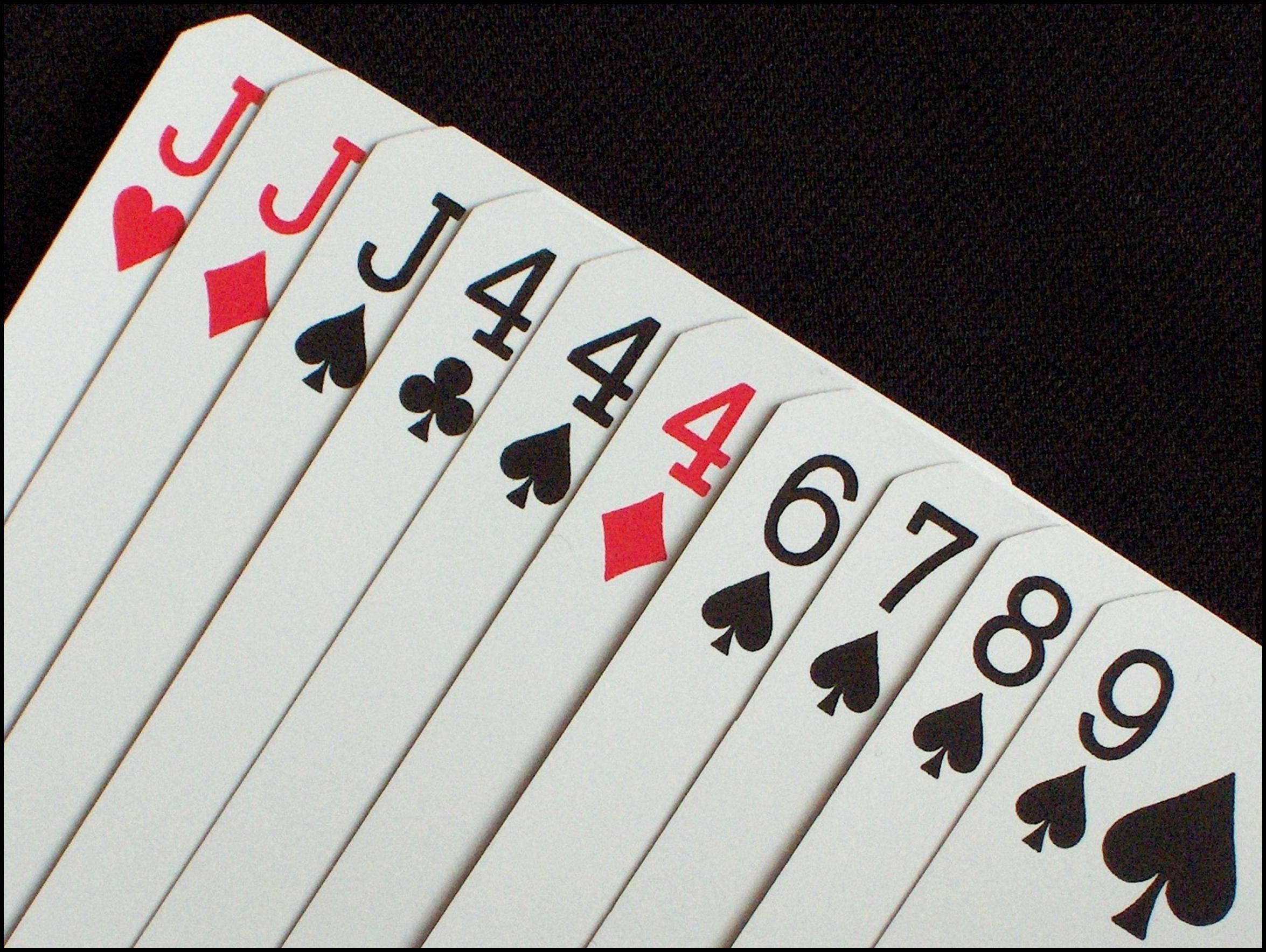 Gin Rummy is a popular two-player "draw and discard" standard deck playing card game derived from Rummy in which players follow basic Rummy rules for forming "melds" of three or more cards of the same suit, or 3 or 4 cards of the same rank. Each turn players draw a single card, either from the top of the discard pile or from the top of the draw deck, and then discard a card from their hand. Melds are formed in a player's 10-card hand and kept there until a deal is ended by one player "knocking" when he has few enough non-melded "deadwood" cards to "go out": generally cards whose values total 10 or less (with face cards valued at 10 and aces low), though some variants value differently. The player that did not go out then has the opportunity to place his melds and "lay off" any of his cards that he can add to his opponent's melds. The values of the remaining deadwood are compared and the player with the smallest total scores the difference. If the player that did not go out's deadwood is the same or less than his opponent, he gets a 20 point (Variant: 25 points) bonus for "undercutting"; if the player that went out with "Gin" by emptying his hand without deadwood, he scores a 25 point bonus (and cannot be undercut, and the opponent cannot lay off deadwood to his Gin meld). The game continues with subsequent deals until one player's total score reaches at least 100. At that point, the winning player is awarded an additional 100 points (he also doubles this score if his opponent has not won a hand). Each player then scores an additional 25 points for each hand won. The winner is the player with the most points. (Numerous variants and much regional variation occurs in the values assigned to these scores, and many bonuses and additional variations in scoring exist.) Gin Rummy is distinguished from Rummy in general in being a "knocking" game in which melds are retained in the hand until the end of a deal, and in which it is possible to "go out" without completely emptying one's hand. It is distinguished from games like "500 Rum" in that only deadwood scores. In Spanish-speaking countries, the game is played with the Spanish deck and it's typically called "Chinchón" or "Txintxon" (in Spain) and "Conga" or "Golpeado" in Uruguay and Peru, respectively.