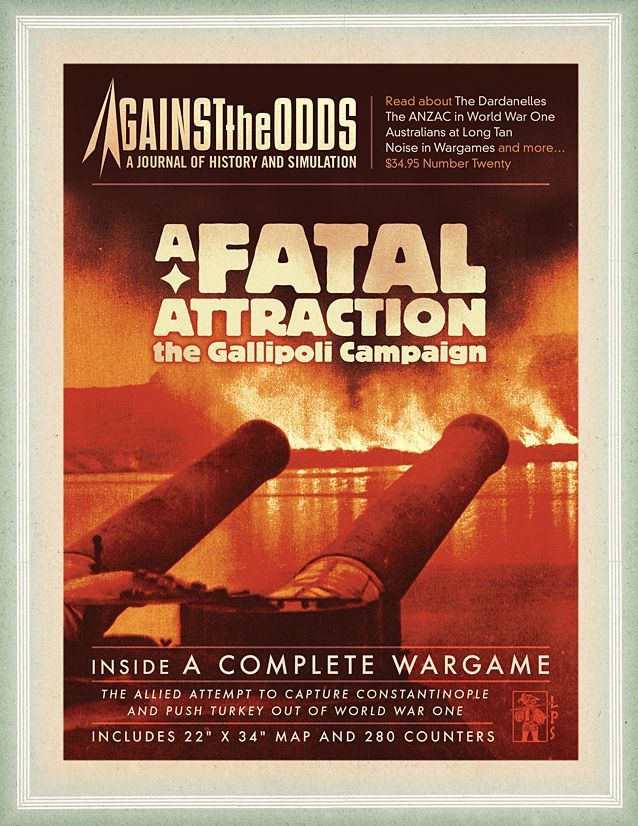 Publisher's blurb: A Fatal Attraction: the Gallipoli Campaign, is a wargame simulation of the 1915 Allied French and Commonwealth forces) offensive against Turkey. In the beginning, it was Churchill's idea... a way of putting the old "pre-dreadnoughts" to useful service and making a show of strength in the waters off Istanbul which would, he said, cause immediate regime-change and take Turkey out of the war. It was thought very little infantry would be needed. In the end, when the last Allied troops evacuated, the casualty count for both sides topped half-a-million. (And Churchill lost his job.) And yet, the big naval attack had almost succeeded. The Allies would not know until after the war ended how close they had come to achieving their breakthrough on the Dardanelles. It was the first of many "what might have been" episodes, where success was just one more push, one more aggressive movement away...in contrast to many times when failure was reinforced and repeated. Gallipoli is held as something sacred by the Australians and New Zealanders... as though they own it. The British would point out that the ANZACs made up less than 10% of the overall force and suffered less than 10% of the casualties. (But you can still get into a fight in Sydney if you talk like this!) A Fatal Attraction brings this campaign of tragedy and opportunity to life. The counters represent brigades, batteries, and ships, and players have the chance to do better than their historical counterparts, while gaining a greater appreciation for the difficulties faced by both sides, including supply shortages, command/control difficulties, and random events. With A Fatal Attraction, you'll find everything you need to understand Gallipoli except the smell and the flies. Published in Against the Odds magazine #20, August 2007 Game Scale: Turn: 1 week Map: Area Unit: Infantry Regiments/Brigades, Artillery Batteries and individual ships Game Inventory: One 22" X 34" mapsheet One countersheet (280 1/2" counters) One 12 page Game Rulebook Four pages of chart & tables Complexity - Medium Solitaire suitability - Low Playing time - Up to 6 hours