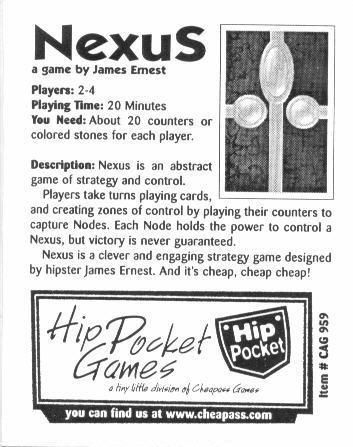 Players place cards in a basket-weave pattern to form Nexuses out of the nodes that are printed on the cards. Players also mark nodes in an attempt to control the Nexuses. When a card is placed which closes a Nexus, the player with the strongest control on that Nexus scores points equal to the strength of all open nodes on the Nexus. First player to 10 points wins. Nexus is part of the Hip Pocket Games series. Awards 2002 Listed in GAMES Magazine's GAMES 100