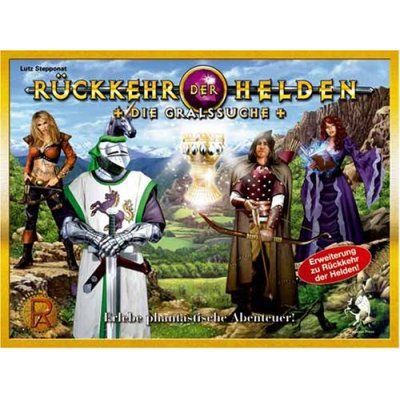 Die Gralssuche is an expansion to Die RÃ¼ckkehr der Helden. Instead of fighting the Nameless One, the goal is now to find the Holy Grail. The expansion replaces all the (hidden and open) chits of the base game: monsters, tasks, quests, encounters, and the like. In addition, there are three new heroes (on two character sheets). You now have to solve riddles (tasks), fight north men and new terrible monsters, and gain help from individuals of the Arthurian Saga, like Arthur, Merlin, Lancelot, and Guinevere. They become companions and improve the heroes stats, but they also have special abilities, which might be very helpful in the right moment.