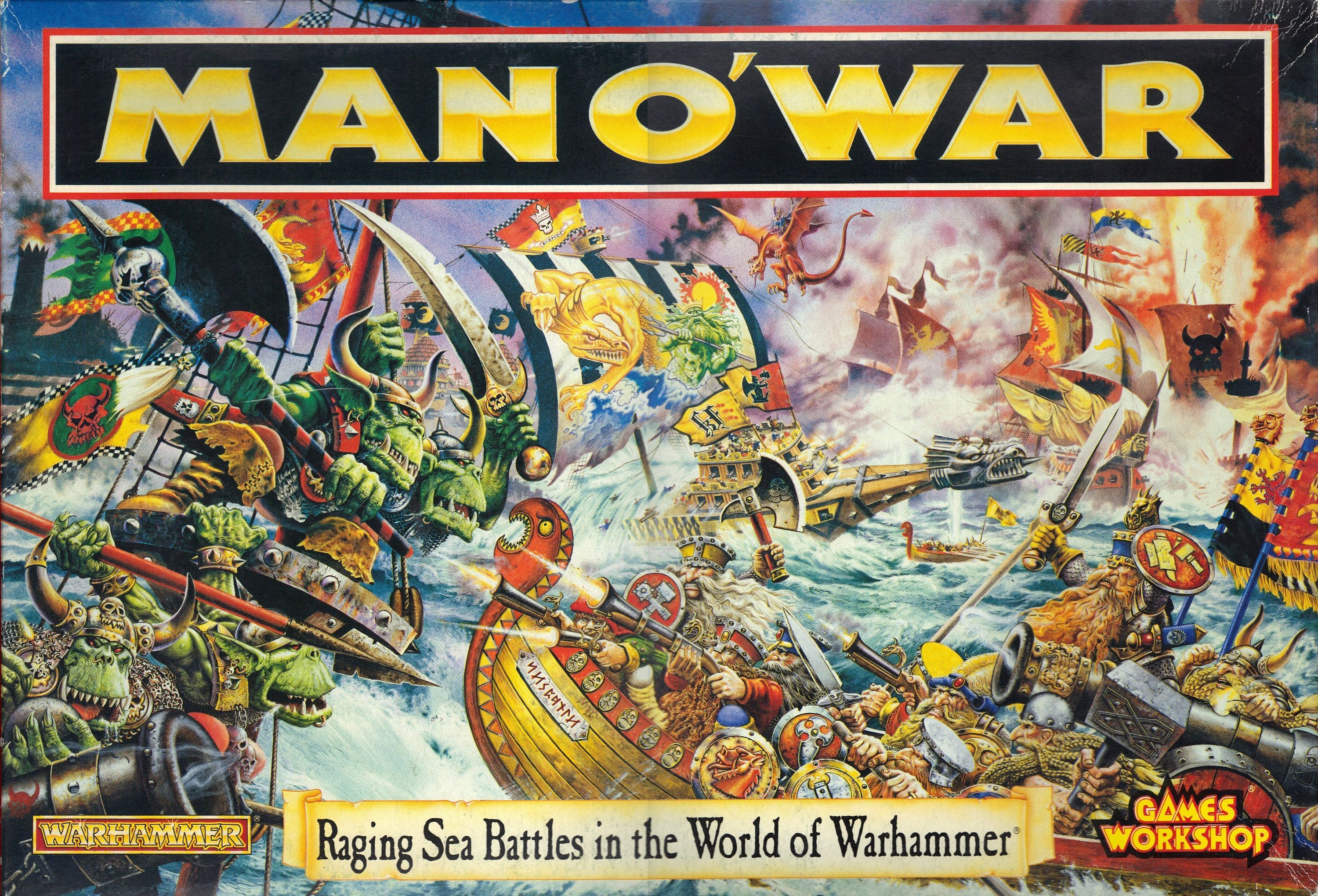 Man O' War is the game of Raging Sea Battles in the Warhammer World. As an admiral of an ocean-going war fleet you must command your ships - which can be either squadrons of Ships of the Line or heavily armored Men O' War, in the battle for supremacy of the high seas. Players choose fleets from the multitude of races of the Warhammer world. Every ship is represented by a template showing individual areas, each with a description of the items (masts, cannons etc.) in those areas - as well as the damage that they can take before being destroyed. Each location has a value that must be rolled to hit that area when attacked, along with another value that can be rolled by the defending player to possibly prevent any damage that might occur. Ships are classified as Ship of the Line (SOL) - which are designed to move as a group of three (each moving and fighting to completion before continuing on with the next ship in the squadron), a Man O' War (MOW)- which are single ships that are much larger, more powerful and crewed by larger numbers than a single SOL classed ship, or finally as an Independent (IND) - which are used individually like a Man O' War but are more in line in strength and abilities to that of a Ship of the Line. At the beginning of each turn, players determine Initiative by each rolling a die which determines either who will go 1st in each phase - if the numbers are different, or how the wind direction changes if they both roll the same number. If the wind changes, the initiative roll and resolution is repeated until one player wins the die roll. Players then conduct the Magic Phase with each Admiral having his Wizard make one spell attempt if desired. If a spell is successful, the other player can try and dispel that cast spell if they have a corresponding type of magic to make the attempt. Next comes the Battle phase which is based on the previously determined initiative roll and players alternate between phases of Movement/Combat, each choosing a single MOW, IND or SOL Squadron and then conducting movement and making attacks before passing the turn sequence back to their opponent. This process continues until all ships have moved on both sides. Once that has occurred, the turn is over and a series of quick turn ending/record keeping events occurs before moving to the next turn. Game play continues for a predetermined time or until one side is destroyed, surrenders or flees the battlefield. There were two separate expansions to the main game. The first was Plaguefleet which added rules and templates for the Chaos fleets of Khorne, Slaanesh, Tzeentch and Nurgle (collectively known as a Plaguefleet), the Skaven and finally the Chaos Dwarfs. This expansion effectively doubled the number of available fleets for the game. This expansion also included color templates for the original 6 races as well (Imperial, Bretonnian, Dwarf, High Elf, Dark Elf and Orc). The 2nd expansion Sea of Blood mainly introduced new rules for Airpower, Sea Monsters & Beasts and Allies as well as new ships for the Dwarfs and Imperial fleets. The inclusion of the Norse fleet wrapped up the content for this expansion. Finally, complete rules for an Undead fleet - as well as some expansion rules for a few of the other races, were included in several of the issues of Game Workshop's Citadel Journal magazine. A wide variety of miniatures were produced to represent the many ships detailed in the main game and expansion sets but no miniatures were ever officially made for the Undead fleet. Assembling and painting the miniatures gave the game a feeling of being "collectible" as well as being a hobby in itself. Many players have created customized ships and new ships (and even complete fleets) including rules, ships templates and completed miniatures. The largest collection of these creations is housed at the Yahoo group Sea of Claws.