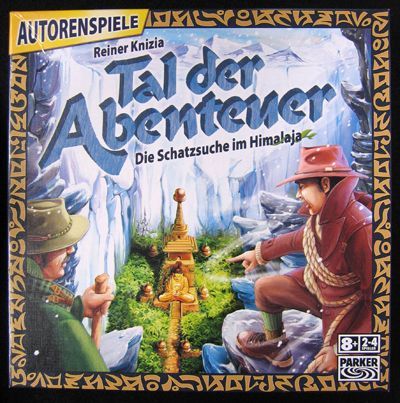 Tal der Abenteuer gives us a two-sided gameboard with an adventure on each side. There are pawns in four colors, but players do not lay claim to them. Instead, the players play cards capable of moving one of the pawns forward along the paths. The paths diverge often, giving players a chance to send pawns on longer routes or to get them back onto shorter routes. Getting a pawn to certain spaces rewards the player who moved it with gold, diamonds or additional cards (randomly assigned by face-down "stepping-stone" markers). Once a player moves a pawn onto the temple, the end-zone of the path, the first round ends. That player gets 1 diamond. Next, the players are rewarded and/or penalized for the cards left in their hands, based on the zone the pawns have ended in. A card for the pawn in the end zone (the one that ended the round) earns +3 gold, +2 for pawns in the second zone, +1 for those in the third, 0 for those in the fourth and -1 for those in the fifth. Now the board is flipped to the second side and a similar adventure embarked upon. This second side has an additional feature: bridges that are destroyed after crossing, further complicating the choices about divergent paths. At the end of the second side, when a pawn reaches the goal, diamonds are counted and the player with the most diamonds gets 12 gold and second-most gets 6 gold. Cards remaining in hand are again paid off according to the zone the pawn of that color finished in. The game ends after this final scoring, and the player with the most gold wins. Winner of Austrian Spiel der Spiele 2006.