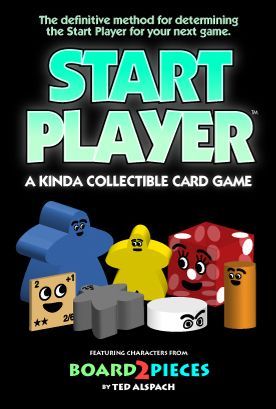 Start Player: A Kinda Collectible Card Game is "The definitive method for determining the Start Player for your next game." Each card has a specific attribute on it; to play, a card is flipped and read; the Start Player is determined instantly. Criteria includes things such as who the tallest player is, who has the most buttons, or even the last player to listen to live music. There's even a built-in tiebreaker system in the unlikely event of a tie. There's a complete game in every deck of Start Player cards too, which can be played by any number of players. And the Start Player cards can be used to determine more than just who goes first; you can use them to choose who gets to pick the next game, who has to order pizza, or who has to clean up the game you just played. Each card features a unique comic panel with Ted Alspach's Board 2 Pieces characters as they discuss either the card criteria or other related gaming issues. The Starter Deck contains 42 cards, including a mix of uncommon and common cards, and at least one rare card. Booster Packs of 13 cards are being sold as well. Start Player: A Kinda Collectible Card Game is out of print. Start Player was announced by daVinci Games and Z-Man Games in August 2008, with expected publication at or around Essen Spiel 2008. It contains a set of 54 cards (no variation between decks), rules and a Start Player character meeple. Start Player Card List Re-implemented by: Start Player