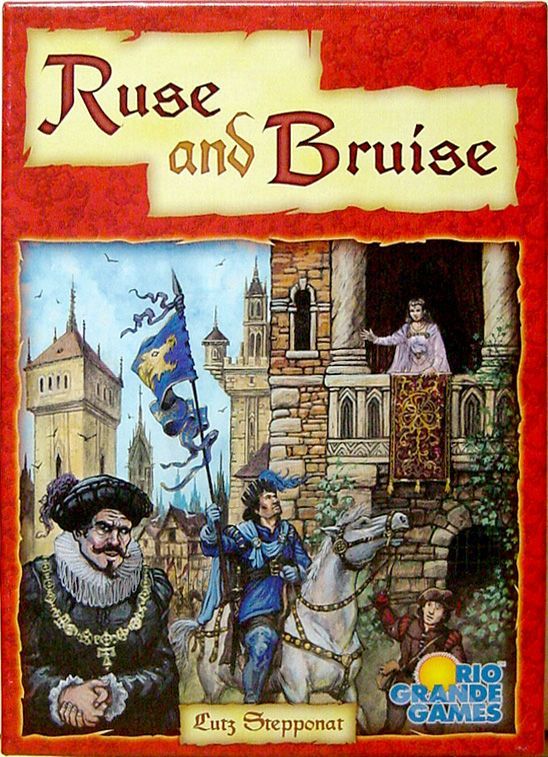 Description from Spielbox: Kabale und Hiebe (Cabals and Blows) by Lutz Stepponat is a fast-paced card game in the tradition of Citadels. Magicians and dragons, kings and princesses populate the land and want only one thing: the greatest fame. The players try to use their royal household to cause problems for their opponents and trick them with underhanded chess moves. In the process, turbulent developments and surprises are guaranteed. Game Summary Setup - Shuffle the goal cards = cards worth 1-5VP, each with one of the 6 symbols printed on it. Deal 6 to each player (face down stack); the rest are removed from game. - Each player gets their pile of influence cards. Shuffle into your own draw pile, and draw a hand of 3 cards. Play - Each round, players place their top goal card in the center of the table - Starting with random player, play a card then draw a card. - Cards are played face down in a column under any of the goal cards. When played, you flip over the face down card above it and execute its action (if any). - Continue taking turns till all goal cards have at least as many cards below them as their VP value = End of Hand. End of Hand - Reveal all face down cards at the bottom (but don't execute their actions). - Mercenaries, Wizards, Witches, and Princes/Squires execute their actions. - Then each goal card is awarded to the player with the most influence below (= sum of their card values). Ties go to the player with the card highest in the column. End of Game - Play 6 rounds. - Players score VP equal to the higher of: ... sum of the values of all goal cards won OR ... if you have a set of all 6 goal symbols, sum those 6 cards (highest VP per symbol) and double it. Then, subtract 1VP per goal card remaining (ignore VP value). - Most VP wins. Several levels of tie breakers.