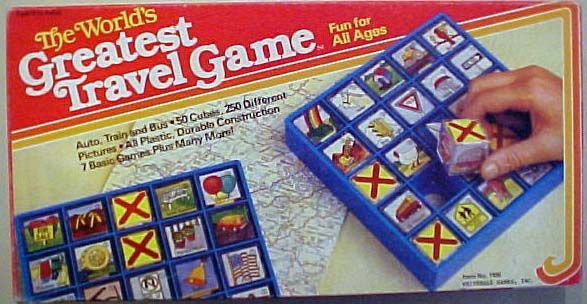 Two containers hold 25 3 dimensional one-inch cubes each. The cubes have pictures numbered 1-5 on all of their sides except one, which holds a large red X on it. The object of the game is to to acquire five X's in a row, like a bingo game. However, this game is much more complex in its variant forms. Initially, the base setup is for each person to turn all of their picture cubes to the 1 numbered picture--the easiest items to spot. Goal: Spot five items or a picture of each of the five items, revealing 5 X's which form a straight line. Rise To The Top: In this variant, each person does not reveal the X upon sighting a 1 numbered item. Instead, the person will turn the number two picture to the top. This continues until the number three item is sighted, and the X is turned up. The first person to five X's in a row wins. Go For Points: Similar to Above. Attach a time limit or mileage limit to the game. At game end, total the numbers of the photos as points, scoring each X as a 10 point item. Highest total wins. This can be played as a solo variant, with a solo player trying to accomplish point goals per number of miles, or trip duration. The Handicapper: In a child versus adult game, using the base game rules, the adult would adjust their numbered pictures to a 4 or 5 starting point. One Block At A Time: Start with all X's showing. Each person will take out the first block in their container. As soon as either player sees one of the five items, they replace the block in their container with the picture showing of the item spotted. They then move on to their next block, until all 25 blocks are gone through. The game ends when one person is done with all 25 blocks. Total all points of exposed pictures. Get Nasty: Each player arranges the cubes of their opponent, using the number five pictures of each number (5-5's, 5'4's, etc...) and arranges them in a way which is thought to be most difficult to achieve 5 in a row. Same as base game otherwise. Composite Game: Start with all number 1's. As you see each item, turn that cube over to X. When you get five X's in a row, turn that row over to the number two pictures. Continue with the same goals, turning five in a row over at a time until you get the five numbered pictures. The first person to turn over five number five pictures, revealing the final X's, wins. A complicated variant, indeed.