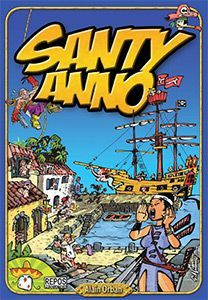 Description from the publisher: You are one of the notorious pirates of the Santy Anno, the terrifying three-master that makes the Caribbean seas insecure. After a long night drinking rum and partying, you have forgotten where your ship is and, even worse, who is your captain! To resolve this, actually very common problem in a pirate’s life, the pirate’s guild has initiated a new tradition: the first 3 on board will respectively become captain and first mates. The ones arriving too late will be demoted to ship’s boys and spend the rest of the trip cleaning the deck! Will you be fast and smart enough to avoid being spending the rest of your time with brush and bucket instead of sword and gun? Avoid to be demoted and get a maximum of ducats. At the end of the game (5 rounds) the player with the most money is nominated captain and wins. The next 2 are his first mates. The others lose and have to pay for the next round… and to clean the table and glasses! This is a pirate game. The 500 first copies will come with a limited Ex-ludis signed by the designer along with the expansion Santy Anno: Blackbeard at the Pub. Expanded by: Santy Anno: Blackbeard at the Pub