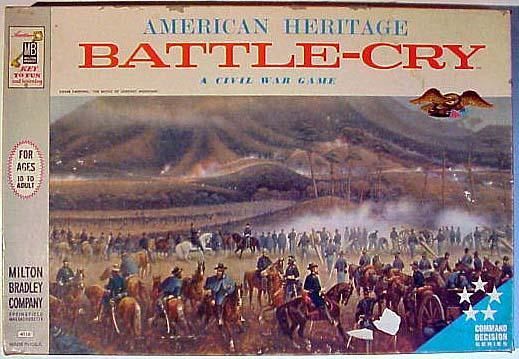 One of the American Heritage Command Decision Strategy Games. This one is the American Civil War game. Each side has 22 pieces (10 infantry, 10 cavalry and 2 artillery), and the starting positions are fixed. The grid is square, with no diagonal movement allowed. On your turn, you roll two dice for movement, resulting in between 2 and 12 movement points to allocate. Infantry moves 1 per pip, cavalry and artillery 2 per pip (a one-square move still consumes 1 pip). Mountains force pieces to pause (they must stop until the next turn). Railroads link stations and can be used to accelerate movement (one station per pip). Combat is handled by lining pieces up (horizontally or vertically) to face (or flank) an enemy column. You must have battle strength superiority to resolve the battle, and this is done after movement is concluded. Infantry and artillery have combat strength 2, cavalry has combat strength 1. The rear piece then jumps to the other end of the combined columns, and the entire enemy army is removed. To be used, cavalry must have a piece at the front; artillery, if at the rear of your column, eliminates the enemy army without jumping. Artillery cannot attack by itself. Double jumps can happen, if the jumping infantry piece ends up facing a lone cavalry. An open square must exist to jump to, so some map deployments are "safe" --but not against artillery. However, pieces trapped so they cannot move are also removed as if they had lost a battle, so this strategy can backfire. You win by completely eliminating the enemy army --but a player may concede earlier when a loss becomes unavoidable. The four player game splits command of each army in two, and is played in partnerships. A really good game, combining a historical theme with rather abstract mechanics.