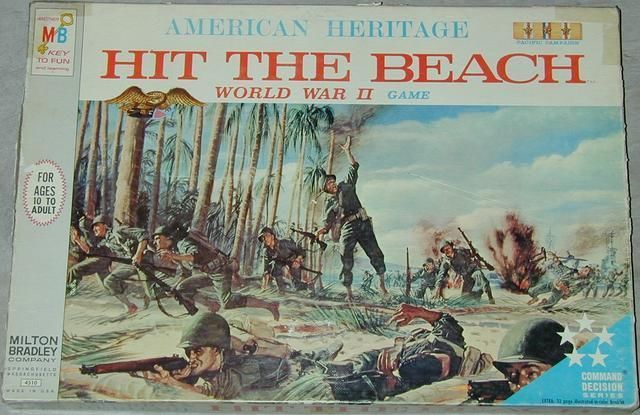 One of the American Heritage Command Decision Strategy Games. A World War II Pacific Campaign game, the players are in a race with each other to reach the "final objective" -- the main Japanese HQ. The Japanese defense forces (14 pieces) are obstacles for all players; when defeated, they are redeployed by that player and can thus be used to slow down opponents. Each player has 6 pieces (2 Marines, 2 infantry, 1 naval landing support ship and 1 strategic air support aircraft). On a player's turn, they roll the die and can move one of their soldiers. The support pieces (ship/aircraft) move only on a 6 and are immediately deployed where necessary to support a beach landing. Moving a soldier on top of an opponent's by exact count "relieves" it and sends it back to its start space. Each player must clear the two beaches that match their color. To do this, both support pieces must first be brought to bear, and then a Marine must reach the defender by exact count. Once cleared, beaches remain clear and can be used by all players. The mechanics are a variant of the old public domain game of Malefiz or Barricade.