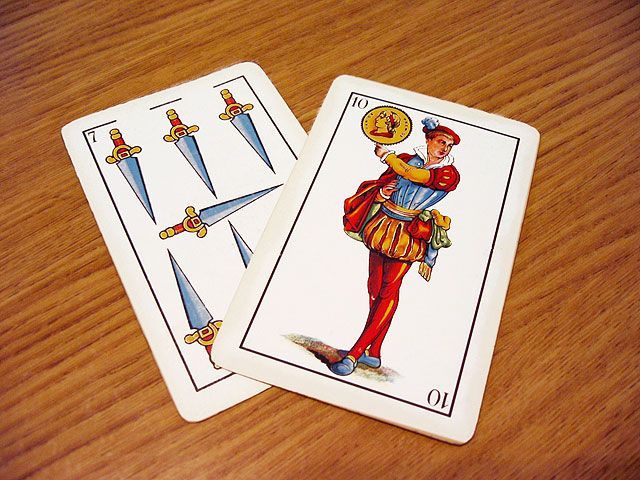 Similar to Black Jack and "vingt-et-un", Las siete y media is a more simple and familiar game. You need a Spanish deck, take away the 8, 9 and 10. The value of the face or court cards: The King (rey), The Knight (caballo) and Jack (sota)is half point and the rest the same value as shown on the cards. Ace is 1 point, 2 two points, etc... The objective of the game is to be the player who is nearest to, or who has scored exactly seven and a half points with his cards. Exceeding this value busts your hand. One player takes the role of the dealer, and the other players play against him. The dealer deals one face down card to each player, include himself. Then, by turns, each player makes a bet and the dealer deals one card to him, this card can be face up, if the player doesn't show his dealt card, or face down if he does reveal his dealt card. The player may stand if he has seven and a half points or lower. Once each player takes his turn and makes his bet, the dealer plays his cards trying to beat the hands of each player. When the dealer stands his hand, the other players reveal their cards and the dealer must pay the bet or take it from each player depending the value of his hand. If one player has seven and a half points then he becomes the dealer. If more than one player has the same points then the player to the right of the dealer becomes the new dealer.