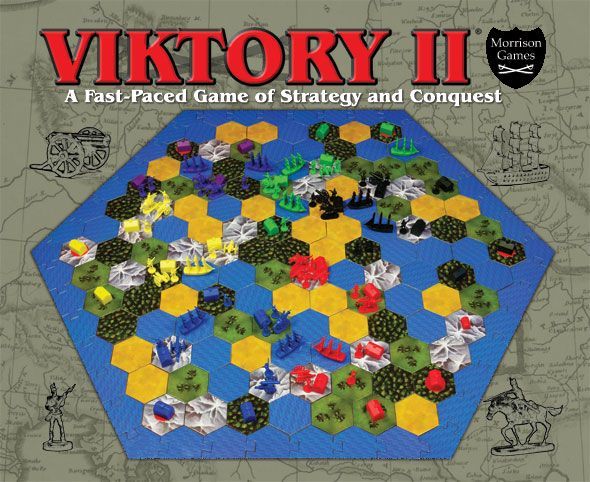 VIKTORY II builds upon its predecessor, VIKTORY, also by Morrison Games. A light wargame that lasts 1-4 hours, VIKTORY II features simple rules, 861 individual game components, and an aggressive style of play that avoids inaction and turtling. VIKTORY II is loosely based on 19th century warfare and supports up to eight players fighting for game domination, either through direct player elimination or alternately through player subjugation. Each player has custom designed infantry, cavalry, artillery and frigate units waging war upon a modular hex map comprised of mountain, forest, plains, grassland, and water hexes. The modular map is scalable and customizable, allowing larger or smaller maps to be played for either longer or shorter games. During the game, players explore the map by moving units and building towns and cities. When they encounter other players, fighting begins. Combat is fought through dice rolling based upon the number of different types of units engaged in battle, the terrain being fought upon, and the presence of a town or city. The fighting units are maintained by towns and cities through a unique support system, and gained or lost as their supporting towns and cities are built or captured.