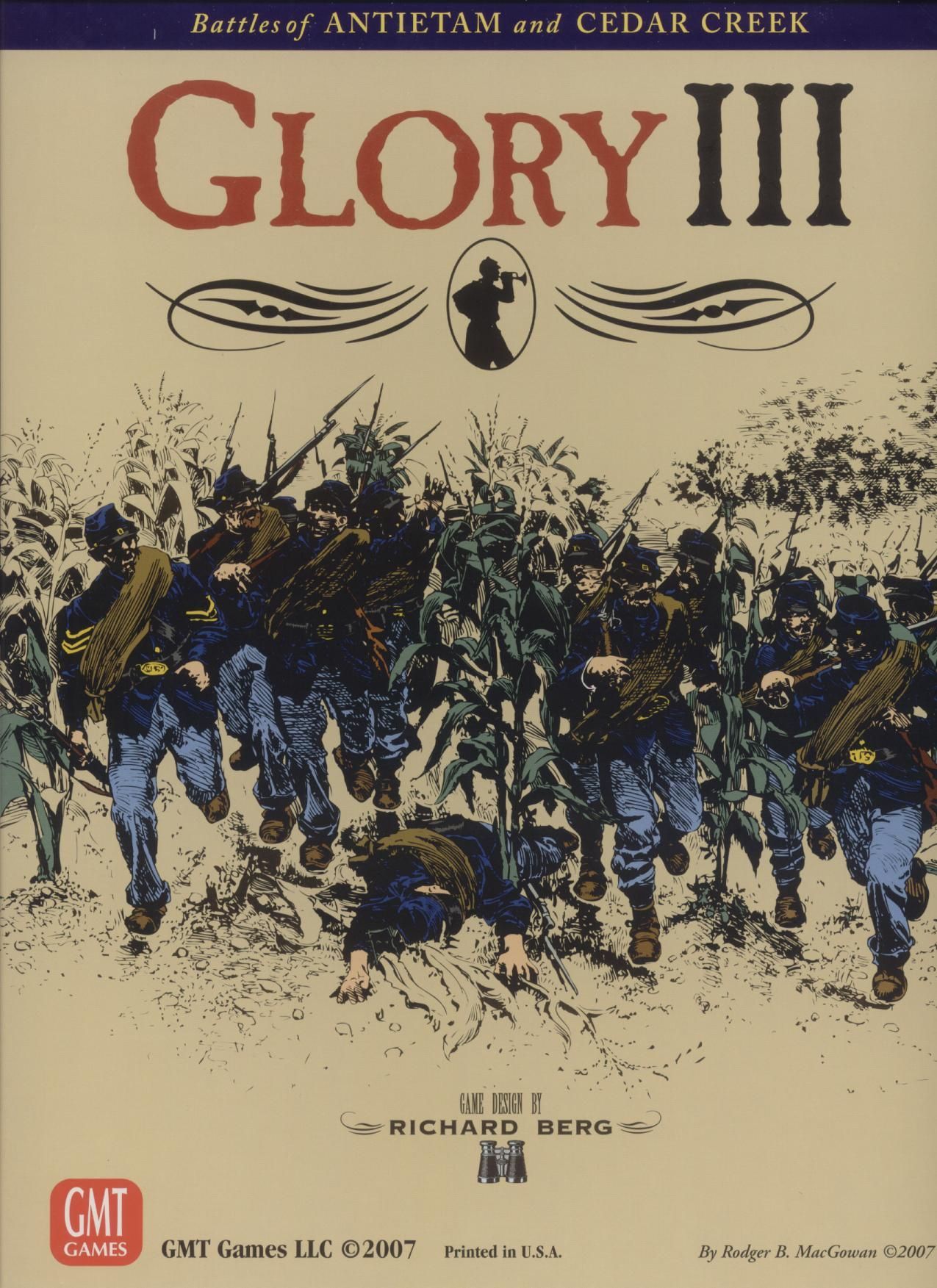 (from GMT web site :) Glory III is the third game in GMT's popular American Civil War series, Glory. This series presents a brigade-level system that highlights ease and speed of play combined with solid historical insight. Glory III follows the success of Glory II: Across the Rappahannock, and presents a polished system with ease of play, with two combat-intensive one-map battles. And it is still a game that can be played, and played well, by solitaire gamers. Glory III features GMT's unique chit activation mechanic, which provides a great deal of play tension, as the commanders never quite know what is going to happen next. However, new command and combat mechanics make the game even more fun. Both battles have special command problems and some new and interesting mechanics to allow the players to play within the framework of those conditions. Antietam, one of the major battles of the war, makes great use of the Glory activation system, linking the Union/McClellan command problems directly to its use. But it still allows the player to make choices, choices different from those Little Mac made, perhaps changing the course of the battle. Cedar Creek is a great momentum battle, with an initial, probably highly effective Confederate surprise attack followed by the return of General Phil Sheridan to the battlefield, the arrival of George Custer's repeater-armed cavalry, and, hopefully for the Union Player, enough of a counter-attack to snatch victory from Jubal Early's rapidly munching jaws. Has Jubal bitten off more than he can chew? Grab your wallet, roll the die and find out! Designed gloriously by Richard H Berg, Developed with consummate skill and dedication by a new star on the industry horizon, Jim Dauphinais, playtested to a fine edge, and featuring the usual eye-popping, drool-inducing GMT graphics, Glory III is the best game yet in the Glory series. Components: 1 22 x 34 backprinted map 2 counter sheets Rulebook 1 die Player Aid Cards Designer: Richard Berg Developer: Jim Dauphinais Game 3 in the GMT Glory Civil War game series. This series features battles recreated at the Brigade level with each game in the series featuring 2 battles from the Civil War. In this edition of the series the two battles are Antietam and Cedar Creek. The Glory system features a unique chit activation mechanic. This results in players unsure of when or if a certain field commander will carry out your orders. The game system is designed for playability over bookkeeping. The main rules are only 12 pages long. Scenarios run from 2 hours for Burnside's late afternoon attack at Antietam, up to 6 hours for Cedar Creek and up to 12 hours for the full battle of Antietam (if it needs to go the distance for a decision).