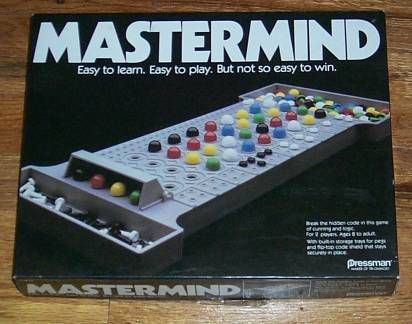 Guess the color of hidden pegs. A deduction game where each player takes turn making a limited number of guesses, using logic to deduce what pegs the opponent has hidden. One player secretly puts four colored pegs in the spaces behind a screen at once end of the game board. The other player, the code breaker, makes a series of guesses. After each guess, the code maker uses smaller pegs to tell the code breaker if their guessed pegs are the right color and in the right place, are the right color but the wrong place, or are the wrong color entirely. The code breaker makes another guess in the next row, building upon information from previous guesses, trying to match the pegs the code maker hid at the beginning of the game. This is a two-player game with 4 holes. For other combinations, please see the Mastermind family. Mastermind was inspired from Bulls and Cows